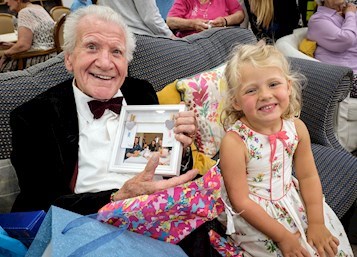 Older people and children are set to continue benefiting from spending time with each other at Lark Hill Retirement Village, the backdrop to this year’s BAFTA-nominated series Old People’s Home for 4 Year Olds, produced by CPL Productions.

Registered charity, The ExtraCare Charitable Trust, whose residents had the nation welling up and laughing out loud, has announced its plans for a lasting legacy project to the televised social experiment with its neighbouring nurseries: Beeston Nursery, Grosvenor House, Tiny Talkers Day, and Highbank Primary and Nursery School. And is encouraging people to take a moment to spend time with others outside of their age-group.

A rolling six week intergenerational activity programme will see twelve children meet with ten older residents to share activities including collaborative art, sports, and trips out, culminating in a party day - the chance for residents and their younger pals to celebrate their new found friendships.

Mick Laverty, Chief Executive at The ExtraCare Charitable Trust comments: “We have been overwhelmed with the response to the Channel 4 documentary and are immensely proud of our older people who took part. The show was both heart-warming and heart wrenching at times, and we’ve learned a lot.

“The results that followed the twelve week experiment have really highlighted to us the positive impact and tangible benefits on health and well-being that bringing the two generations together can have. This is why we have committed to ensuring more of our residents have the chance to spend quality time building bonds with the very young.

“We already know from research with Aston University that those who live in our villages (86%) are fortunate to hardly or never feel lonely, but we understand that feelings of isolation and self-esteem are still an issue for some. With this in mind, we’re pleased to announce that we’re going beyond the lasting legacy at Lark Hill and have plans underway to embed intergenerational activity into all of our retirement communities.”

Ken Pidcock, Lark Hill resident and star of Old People’s Home for 4 Year Olds comments: “It was an experiment to see if bringing the young and old together would bring benefits.  We’ve proved the experiment works for both parties and it’s been a life changing programme.  Long term, my wish would be to have a crèche here alongside the village.”

Roopam Carroll, Owner of Beeston Nursery comments: “We’re very pleased that the children who attend our nurseries, and their families, were supportive of our involvement in the programme and are keen to take this new project forward. This is a great opportunity for the children and families who could not participate in the TV show to benefit from this wonderful intergenerational work.

“We have taken our learnings from the experiment and using our experience as early years experts, have worked together to develop a curriculum for the intergenerational project which will meet the needs of the younger and older participants alike. We hope to be able to share our experience with other nurseries across the UK and enable them to implement similar projects.”

Kathryn Nicholson, nursery manager of Grosvenor House Day Nursery comments: “Being part of such a wonderful experiment has opened our eyes to the positive impact it has had on the children. We cannot ignore the fabulous journey that everyone involved has been on, and the relationships and bonds that have so quickly formed. The results have been astonishing. We must continue with this intergenerational approach with the hope that it may become the norm for more settings like ours in the future.”

Residents at ExtraCare’s retirement villages are to benefit from a range of intergenerational activities including a playgroup for 0-5 years at its Stoke Gifford Village in Bristol and plans for a play area for its Solihull Village currently in development. A number of its villages are already bringing the young and old together. Residents have visited local schools to listen to pupils reading and help with work. Children have attended craft classes run by residents. And at its Longbridge Village in Birmingham an established Stay and Play group meets weekly which sees residents mixing with children just a few months old.

The TV show saw a nursery created within ExtraCare’s Lark Hill Retirement Village in Nottingham. A team of geriatric specialists measured the impact of the intergenerational activity, focusing on mood, memory and mobility, and the effect on the children was also assessed.

The BAFTA-nominated five-part series concluded last night, Monday 5th November at 9pm on Channel 4. All five episodes of Old People’s Home for 4 Year Olds are available now on All 4.

For more information please contact: Cheryl Flounders on 02476 507 917 or at cheryl.flounders@extracare.org.uk