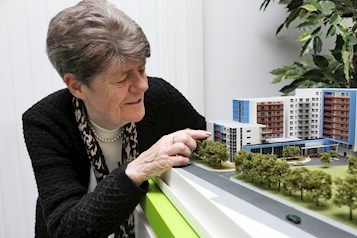 Linda’s life changed in 2013 when her husband William died, just a year after their golden wedding anniversary.

The couple had spent all their time together. "We did everything together," she recalls. "We had a caravan and we went away every weekend. We were never apart really, only when he was working. He was a lovely man."

When William retired from his job in the car factory the couple were never apart. They enjoyed travelling in the UK in their caravan, and they took it to Holland or the Isle of Wight.

After William died Linda, who doesn’t drive, sold the caravan and the car. "I just felt down," she says. She didn’t want to live in their two bedroom terraced home any more, there were too many memories in the home where they had lived for nearly 30 years.

She was also having problems with the stairs because of her arthritis and the garden was too big for her to look after.

Linda decided to sell her house and move back to Earlsdon where she had lived before for nearly 20 years, and where she had been a dinner lady in the local primary school.

She went on a coach holiday to Blackpool on her own before she moved into the village. "I like going away, I miss the caravan," she says.

"It's lovely," she says. "I can walk into town and get to the train station. It will be a lot easier."