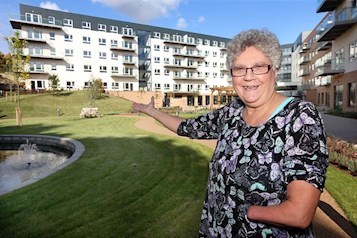 Margery Crampton read the letter at least 20 times before she phoned anyone. She looked at the words again and again in disbelief. She was being offered an apartment to rent at Bournville Gardens.

‘It was absolutely wonderful,’ she recalls. ‘It meant everything to me. I would be back in the community instead of feeling lost and on my own.’

Her daughter was in a shopping centre when Margery called. Louise was crying tears of joy, and concerned shoppers around her wanted to know what was wrong. ‘In the end she held up her phone and said “Tell them mum, tell them that you have your apartment that you’ve been longing for.”

Margery was living alone in a three bedroom council house in Northfield. The great grandmother had given up her full time job in the local post office to care for her husband John who died in 2010.

‘When you are a carer you lose contact with the outside world and that’s what had happened to me. I had shrunk into myself,’ she recalls. ‘I was lonely.’

She missed John, the hard working, lovely husband that she had met when she was 17 and that she had been married to for 48 years. Watching television, she turned to speak to him but there was nobody there. ‘It was a horrible feeling,’ she says.

Margery felt unsafe and insecure. In the evenings she curled up in her chair if someone knocked on the door, frightened and hoping they would go away. ‘I lost all my trust in people,’ she says.

‘I was nervous in a house that had three outside doors, especially during the winter months. I wouldn’t put on my light in the kitchen because I was frightened someone might be in the garden watching me.’

‘I cried in private but I wouldn’t show my feelings to other people. I just felt that life was over,’ she says.

Margery realised she needed to do something, not only to help herself but also her family. She didn’t want them to worry.

It was her daughter Louise who heard that Bournville Gardens was being built, two years ago. Margery registered her interest immediately. She started going to meetings, attending the coffee mornings and going on trips.

‘I could feel myself coming out of the shell that I had sunk into. It was great,’ she says.

Margery slept better knowing that she would not have to face another winter alone in her house.

After moving into Bournville Gardens, she and a fellow resident dressed up as elves for the Christmas fair and Margery is now volunteering for everything; she wants to help wherever she can. ‘I just want to get involved.  I still have a lot to give,’ she says. ‘I can already feel the love of the people that I have met. I have made some really good friends.’

She has also been able to share her feelings with other people who have lost their partners. ‘Talking to them and sharing what you have been through is wonderful,’ she says.

Margery has given her photographs to her family and gave some of her possessions to charity.

‘All my memories will be in my head and in my heart,’ she says. ‘I loved the house and I was sad to leave it but you don’t leave your memories behind, you take them with you wherever you go.’

Her family have told her: ‘Welcome back mum, we felt we had lost you.’

Margery says she would like to say ‘thank you’ to ExtraCare. ‘They have definitely given me my life back,’ she says. ‘They have given me something to look forward to. I feel alive again.’