The key results from our 2012-15 and 2015-18 research studies showed that since moving in, significant improvements can be found in ExtraCare residents’ health and well-being. Residents at our retirement villages get more physical exercise and have improved their memory and cognitive abilities.

In some critical health factors where a downward trend might normally be expected with age, for example functional ability, independence or age-related changes in cognitive function, no such trends are emerging.

Levels of depression are low among residents while social well-being is high, with lower levels of loneliness than national averages.

ExtraCare residents have changed the way in which they use health care resources. Usual age-related changes in frailty status are delayed in. 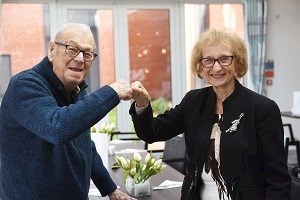 “It’s terribly important that the example ExtraCare has set is more widely known and communicated to society, particularly people in local governments so that they can realise the benefits to the health service that these villages bring.

Download the full research report by Aston and Lancaster Universities