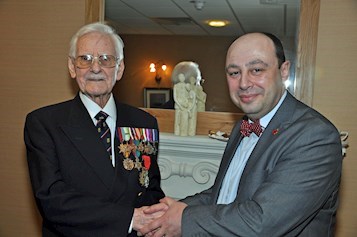 Lark Hill Village resident Vic Chanter is the proud possessor of many awards and medals earned during his years in the Royal Navy, and recently, at the age of 95, he received yet another decoration, the Chevalier de la Legion d'honneur in recognition of his military engagement and steadfast involvement in the liberation of France.

In a letter from the French Ambassador in London, Vic was told that the President of the Republic had appointed him to the rank of Chevalier in the Order national de la Legion d'Honneur.

The French Consul for the Nottinghamshire area, Jean-Claude Lafontaine, visited the Village and pinned the award on to Vic's left shoulder as some of his friends and relatives looked on.

Vic joined the Royal Navy in 1938 and saw action during the war in many parts of the world including the evacuation of troops at Dunkirk and the D-Day landings.

He left the service in 1947 and became involved in communications and did a lot of work with the Army. He has even written a book about his exploits!

Vic moved into Lark Hill with his wife Marjorie six years ago but sadly she died shortly afterwards. He enjoys taking part in some of the activities there.