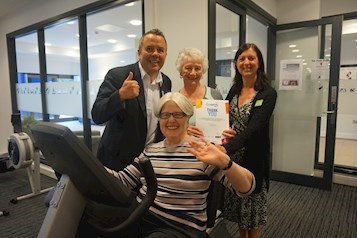 The ExtraCare Charitable Trust has backed Coventry’s bid to become City of Culture 2021. The charity’s support comes as part of the bid’s aspiration to promote the health and well-being of older people across the city.

ExtraCare is a registered charity, based in Binley, with four retirement communities across the city, including three smaller schemes (Willowbrook in Canley, Princethorpe Court in Binley and Humber Court in Whitley)  and the newly opened 262-home Earlsdon Park Village near the city centre.

The charity will be celebrating its 30th anniversary in 2018.  It currently provides homes, care and inspirational lifestyles for over 400 people in Coventry alone. It also has 26 other schemes and villages across the Midlands and north, as well as four villages in development.

The charity has also invested a total of £44 million into Coventry through its village development and currently supports over 50 people with dementia across the city, saving public services an estimated £633,000 per year.

Research with Aston University in Birmingham has shown that the ExtraCare model reduces NHS costs by 38% per resident, with a 46% reduction in routine and regular GP visits and unplanned hospital stays reduced from 8-14 days to 1-2 days.

Michael Mogan, Fundraising Director for Coventry City of Culture Trust, said: “Meeting with the ExtraCare team– and seeing the superb Village complex – was a great experience.

“And, as health and well-being are integral to the Bid we hope to work together going forward. If we have one final ask, it’s for everyone to back us on social media and to promote our wonderful City”

Margaret Wilson, a resident of ExtraCare’s Earlsdon Park Village, said: “I think it is a wonderful idea for Coventry to bid for City of Culture. It will help encourage regeneration and improve facilities for older people all over the city.”

Living at Earlsdon Park has transformed her life. In February, Margaret, who suffers from arthritis, was in a thigh to ankle leg brace and was unable to drive or walk unaided when it was removed.

She said: “Not being able to drive was hard. I had to cancel a dentist appointment as I couldn’t get to it.”

She wanted to get back on her feet and decided to start using the gym in Earlsdon Park more regularly. Over time she has built up her strength, and now goes to the gym six or seven times a week.

“I wouldn’t go to the gym if I still lived outside the village, but it’s so good just coming down and being able to use it here.”

There has been a transformation in Margaret’s health since she started using the gym and she no longer walks with a stick. She has even been able to begin driving again.

“Moving to Earlsdon Park was definitely the right thing for me.”

The ExtraCare Charitable Trust is a registered charity established in 1988 and based in Coventry. Our vision is better lives for older people and our mission is creating sustainable communities that provide homes older people want, lifestyles they can enjoy and care if it’s needed. To deliver our vision and mission we essentially do three things: