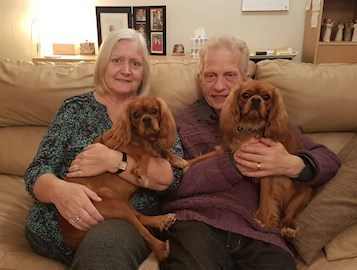 Denise was a teacher and John a hospital chaplain and have been together in their Solihull home since they married twelve years ago.

Since birth, Denise has had a challenging time with her health and mobility.  She was born with cardiovascular issues which eventually resulted in a hip amputation.  More recently, she developed severe back pain after a number of falls whilst using crutches and this caused additional disc damage in her spine.  As a result, Denise now uses  a wheelchair to get around and when John was hospitalised two years ago Denise was unable to get out of the house.  She says the situation was becoming unsustainable:

“I was increasingly becoming a prisoner in this house and this caused me a lot of anxiety. We have a daughter and son but it would be difficult for them to give us the kind of support we may need in the future.

“We planned to move but found our home was low in equity as an ex council house, so we couldn’t afford to buy a more suitable property where I could use my powerchair. We also looked at some retirement developments but found the internal structures were not wide enough to get around in my wheelchair and they also did not allow our pets.

“I approached the local council and some housing associations but I was told by all of them that as we owned a house I was not eligible for social housing.”

Denise and John first saw an ExtraCare village in a TV feature: “I was amazed at the concept,” continues Denise. “We visited the charity’s Hagley Road Village in Birmingham. Both John and I thought this would be ideal for us, the freedom it would offer moved me to tears.

“We liked the fact that you had your own apartment and on site was everything you could need. I am an avid crafter, so the craft room appealed to me, John loves reading so the library was one of the features that appealed to him. We also loved the fact that our two dogs would be allowed to stay with us if we moved to one of the charity’s viIlages.”

Denise and John heard about ExtraCare’s new Solihull Village and went to the marketing suite to meet the ExtraCare team. The couple were keen to move in but were worried they might not be able to afford it. Staff suggested they consider a shared ownership option where they purchase 50% of their home and pay 50% of the rent cost.

“The team were very encouraging,” says Denise. “We found that our house was valued at a similar price to the amount needed. Then we went for a discussion with one of the charity’s welfare benefits advisors and discovered that with our income we would qualify for some housing benefit.  This meant we would not have to pay the full rent on our 50% share or the full amount of charges. We were thrilled because we could afford to live in the village!”

Denise feels it’s important she and John can continue to live an independent lifestyle as their needs change:

“Moving to the village will give me independence which I haven’t had for years, as I will be able to get around in my wheelchair in my home and get out into the village hub to take part in activities. John is my caregiver but as we both get older this may change.  The care element of the ExtraCare concept means that we can receive help in our village home without having to move to a ‘care home’ and this gives us both peace of mind.

“Since retiring I have felt very isolated, so we are both looking forward to joining a village community, which will give us both the opportunity to make new friends, get involved in village life and enjoy new experiences.

“Our visit to another ExtraCare village showed us how happy the residents are.”