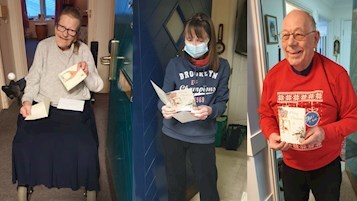 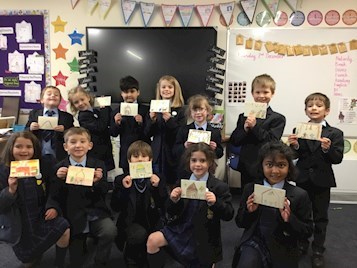 A delivery of Christmas cards created by children from a local school has delighted Gloucester retirement residents this Christmas.

Residents from ExtraCare’s St Oswald’s Village received an impressive 150 cards from The Kings School in Gloucester. Junior school students and those in the younger classes donated their time and craft skills thinking of the older generation. Elderly residents were delighted with the cards they received and the efforts from the children.

St Oswald’s Village has 166 homes and over 200 residents. Approximately a quarter of residents within the Village receive help with their care.

Resident David Edwards, 79, commented: “Receiving the cards really brightened my day.” Neighbour Sue Davis, 77, added: “It’s so lovely to know that there are people out there looking out for others at Christmas – especially young children who made the beautiful cards and put them together so carefully, a lovely gesture.”

Christine Smith, 68, was also touched to receive her card, she said: “Receiving the cards was a lovely surprise. It really is touching to read a young child’s words at Christmastime.”

Village Manager Juliana Rossi welcomed the kindness stating; “Our residents were very moved with the cards they received from both The Kings School and also the charity The Sleighbell Foundation. So many residents came up to me and told me what it meant to them. Christmas can be a lonely time for some, and the generosity shown by the school and the charity has brought lots of smiles into St Oswald’s Village this Christmas. A big thank you to everyone involved.”

Image Caption 2: Children from Year 2 at The Kings School show off their cards.