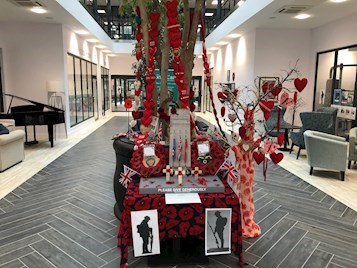 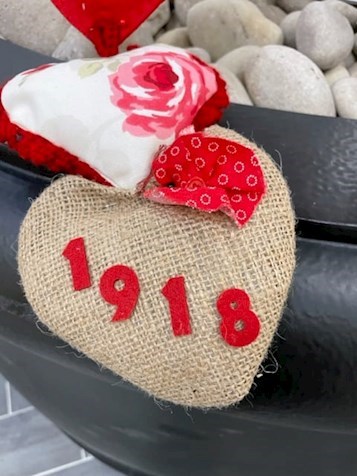 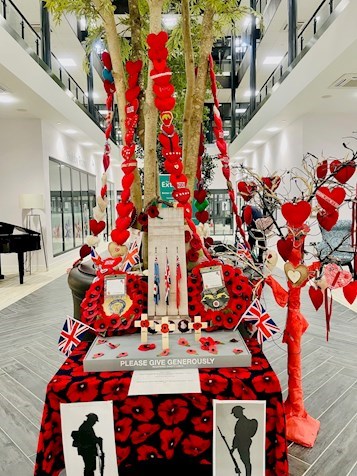 An ExtraCare retirement community has honoured Remembrance Day with a collaborative display involving staff and residents.

ExtraCare’s Hughenden Gardens Village in High Wycombe put the call-out to residents and staff encouraging all stitchers to take up their needles to complete their own collection of felt hearts on display in the village entrance. Residents and staff responded to the call populating a display with hearts. Stitching is known to be fun and can  also be very beneficial for mental health – it can be a meditative process that inspires confidence and feelings of accomplishment and helps people to cope with stress.  An example of this dates back to World War 1 when soldiers who were convalescing were encouraged to make heart-shaped pincushions as part of their recovery.

During the war thousands of commercially produced kits were made and distributed to soldiers and civilians. Kits contained a pre-made calico heart pincushion filled with sawdust, fabrics, beads, sequins for decoration, and pins. This was one of the earliest recorded examples of occupational therapy to help wounded soldiers recover. The therapeutic effect gained from making and sending hearts to a loved one was huge.

Hoping to replicate the therapeutic effects of the original project the display at the village was created by a group of residents. The project began when Hughenden Gardens opened in 2018 and the residents have continued it ever since. Colette Woodbridge who moved into the village with her husband David when the village opened has helped create the display which grows each year and has now compiled well over one hundred hearts.

Colette comments: “Many residents got involved, some of them couldn’t even sew! We cut felt hearts out and you would find residents sitting in the communal areas creating these hearts working in cross-stitch, knitting or embroidery. It has been a big team effort. It’s so very important that we remember this occasion as some of the residents at our village lived during war times.”

Village Manager at Hughenden Gardens, Colin Cole, was impressed with the display adding: “It has been incredibly moving to see how staff and residents have come together to create a display and honour the significance of Remembrance Day, there are a number of very talented people at our village.”