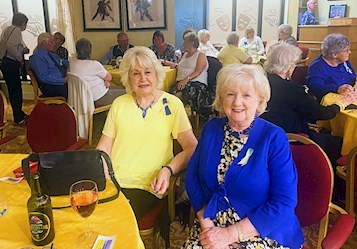 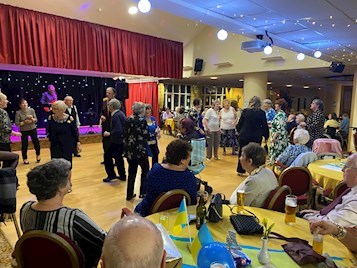 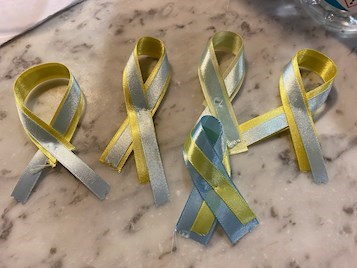 Residents at a Birmingham retirement village have raised an inspiring £3000 for Ukraine.

Village volunteers arranged the support Ukraine event that took place on Wednesday 30 March at ExtraCare’s New Oscott Retirement Village in Birmingham. Two residents who go by BeeJays Productions have raised money over the years through raffles and tombola’s in order to arrange big events at the village at lower prices.

One half of Beejays, resident volunteer Jean Humphreys, arranged for two acts, performers David Laine and Linda Williams to headline the event for Ukraine and wave their charges, performing for free.

The evening went down a storm with over 140 attendees taking part in line dancing, enjoying rock and roll music, and joining in a song or two to support the fundraising effort.

“It was incredible to feel such a sense of community on Wednesday night. People really came together to support such an important cause right now. Everyone did what they can and I am very proud of the efforts of our residents and the local area.”

Resident Volunteer Jean, 82, was touched to see the charitable support of the community adding:

“Sitting watching the evening news I saw the chaos of citizens of Ukraine leaving the cities by train.

The image of a dad having to say goodbye to his wife and son broke my heart and reminded me of how my own mother felt when my father, who was a Royal Marine, left to fight in the Second World War.

I am not able to be there in person to help, but I could be there in spirit and knew that friends, family and fellow residents would feel the same.”

Residents spent the week before making ribbon pins in the Ukraine colours, and chipping in to buy tickets for the event and raffle tickets. Tickets and raffle sales alone raised £1300 of the total!

The £3000 raised will be banked with NatWest Group who are supporting the DEC’s (Disaster Emergency Commission) Ukraine Humanitarian Appeal and will match every pound for pound raised.