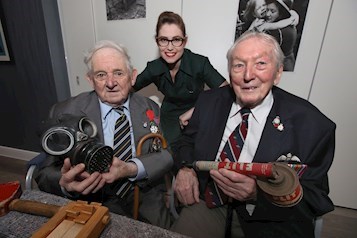 Residents and staff dressed up for the day, and war time displays, posters and documentaries were displayed around the Village hall.

The Village hair and beauty salons were both open for residents who wanted traditional 1940s hairstyles and make up.

The day was rounded off with an evening of Glenn Miller music.

Several residents talked about their personal experiences of the war.

Former RAF flight lieutenant Kenneth Thomas, 95, wore his war medals and talked about how he flew 33 missions over Germany, mostly in Lancaster Bombers. He is the last surviving member of his crew.

Also wearing his medals was 93 year old Dennis Davison, a Normandy veteran and recipient of France’s highest military honour, the Légion d’honneur. Dennis is the founder of the Normandy Day UK charity, which aims to educate people about the impact of war.

BBC Coventry and Warwickshire’s Brody Swain show was broadcast from the Village, which opened in July.

As part of the show, ExtraCare’s Commissioning and Healthy Lifestyle Director Angela Bradford spoke about the Charity’s work, and several Earlsdon Park residents shared their experiences of moving in.

New resident Rebecca Davies, 82, talked about her experiences in Coventry. Rebecca’s new apartment, on the eighth floor of the Village, looks out over the first house she lived in when married to her late husband Bill.