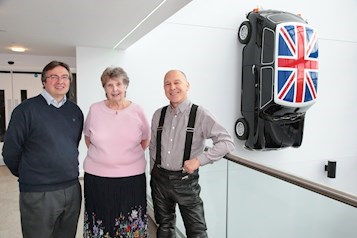 Past and Future Come Together for Older People in Longbridge

Life has come full circle for some of the residents moving to the new Longbridge Retirement Village. The village is on the site of the former Austin Rover car factory where they worked.

The important heritage of the area has been reflected in the design of the £48m retirement village which is being opened by retirement charity, The ExtraCare Charitable Trust, this summer.

New residents have recently had a chance to look around the village for the first time. And there is a replica of a Mini taking pride of place on the wall in the entrance.

‘I think it’s a lovely tribute to the factory and the people who worked there,’ says 74 year old Janet Newell who is moving to a two bedroom apartment at the village. Her husband Brian, who died aged 70, worked at the car factory. ‘He loved the Mini,’ she says. ‘He would have been very proud.’

Peter Heath, who started work at the car factory as a 16 year-old apprentice, also likes the Mini on the wall. ‘I think it is absolutely brilliant,’ says Peter, who is now 65 and moving to Longbridge Village with his 63 year old wife Gill.

The factory has been part of his family life for generations. His father worked there and two of his grandparents.

A specially formed heritage group, that includes local historians, helped to inspire the design of Longbridge Village. The street names are to include Herbert Avenue, Mini Mayfair, Metro Close, Healey Road and Allegro Avenue. Images reflecting the history of the area are also featured on the walls.

ExtraCare Charitable Trust Chief Executive, Mick Laverty, said: “We are aware that many people moving to this village have worked locally and have made a significant contribution to this community. It’s important that the building acknowledges the significances of this site; our charity welcomes new residents, visitors and volunteers wishing to enjoy and support the new facilities here.”

Longbridge Village has 260 one and two bed apartments and is set on five acres fronting Lickey Road on the edge of Longbridge Town Centre.

The village’s 18 facilities include a bar and bistro, village hall, IT suite, hair and beauty salon, gym and shop.

Residents at the village will benefit from ExtraCare’s award winning Well-being Service. A Well-being centre will be run by a qualified nurse and will be available to all residents offering health screening, information and advice on maintaining a healthy lifestyle. Up to one third of residents within Longbridge Village will receive help with care. A recent study with Aston University found that residents living in ExtraCare’s Birmingham villages reduced their dependence on GP and hospital services and this work was recognised in April 2017 when the charity won the UK Housing Awards Outstanding Development Programme of the Year.

Longbridge Village is the fifth ExtraCare village in Birmingham as part of a £200m investment programme between The ExtraCare Charitable Trust and Birmingham City Council. The Homes and Communities Agency has also provided £1.5m to support affordable housing in the development. The village is part of St. Modwen’s £1 billion Longbridge regeneration scheme. Nearly 400 homes have been built, and the town centre features retailers including Sainsbury’s, Costa Coffee, Premier Inn, Beefeater and a landmark Marks & Spencer store.

A community day is being held at the village on 8th July from 10:30am-3pm with opportunities to view the village and meet staff.

Future residents at Longbridge Village, Janet Newell and Peter Heath, with the Mini on the village wall.

The five Villages in Birmingham with the City Council are as follows: