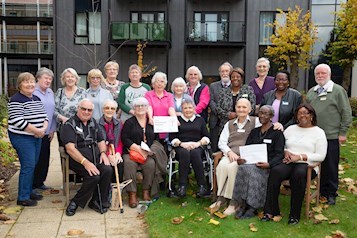 As National Grief Awareness Week brings the eyes of the world on to the subject of grief, loss, and how we cope, we investigate the five-year National Lottery funded partnership between the ExtraCare Charitable Trust and Cruse Bereavement Support.

The COVID-19 coronavirus pandemic has been extremely distressing for those who are bereaved and grieving, regardless of whether COVID-19 was what caused the death of their loved one. Many people were unable to visit loved ones before they died further exacerbating the grief process. While the government statistics focussed on figures of those lost, what of those loved ones who were left behind to grieve?

During this distressing period the partnership between charities the ExtraCare Charitable Trust and Cruse Bereavement Support became an invaluable one. The Bereavement Supporter Project offered support to the bereaved through volunteering projects and engagement with residents in ExtraCare retirement villages.

The project also sits within ExtraCare’s commitment to the Gold Standards Framework for End-of-Life Care. Eighteen of the charity’s locations are now GSF trained and accredited. The GSF framework seeks to provide better support for people as they approach death, to ensure they live well until they die. In the adoption of the GSF for end-of-life care, ExtraCare has committed to opening up dialogue about death, dying and bereavement further.

It was hoped the Bereavement Supporter Project would encourage conversations about bereavement, death and dying and that it would recognise the vulnerabilities that exist alongside the opportunities for social engagement, support, and care afforded by 21 ExtraCare retirement villages and schemes. The project has been a resounding success, ExtraCare residents who may have been unable to say goodbye to those they loved found peer support amongst fellow residents who became trained Resident Bereavement Supporter Volunteers (RBSVs). Providing compassionate listening, volunteers trained by Cruse, took irreplaceable roles emotionally supporting their community and village during the pandemic and beyond.

RBSVs were required to attend Loss and Bereavement Awareness training which staff were also encouraged to attend. Informal information sessions were also held to bring conversations on death into the open. RSBVs proactively communicated with fellow residents and staff, adapting their support to telephone and Zoom support during the pandemic emphasising the often-underestimated adaptability of older people and their preparedness to use available technology to assist others.

Whilst there were no formal qualifications to become a volunteer - there was a formal role description, a requirement to attend the training and an assessment of suitability for the role. This attracted many who were motivated by their own experience of grief, as well as others who were driven to support their peers.

One RBSV commented during the pandemic; “(We) have set up a kind of neighbourly scheme for ensuring that over 60 people receive at least one phone call each week.”

As they carried out this process they were informally building support around those who were isolated, lonely or grieving and recognised as struggling through what was a challenging period.

ExtraCare’s Michael Spellman found the project to be incredibly valuable; “It’s not just grieving for a person, sometimes people are grieving the loss of a home, a pet, a job – all of which, the trained Bereavement Supporters were able to support with. We found that the project empowered residents and encouraged them to support one-another.”

Eve Wilson, Bereavement Supporter Project Manager at Cruse Bereavement Support has been moved to witness the findings of the five-year partnership, she comments; “We’re delighted the evaluation report showcases the invaluable peer support that ExtraCare residents have provided to fellow bereaved residents, especially during such a difficult 18 months. Working together with ExtraCare has allowed us to shift the culture when it comes to talking about loss, dying and bereavement, as well as also allowing us to build supportive communities for the ExtraCare residents.”

The inclusion of residents in supporting one another through the most harrowing of times has resulted in a stronger sense of community and a deeper level of trust within villages. The project provided those it helped with a platform to talk about loss and those who volunteered the purpose of truly helping someone through their grief.