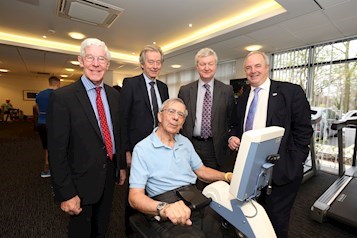 A senior NHS chairman has hailed a Birmingham retirement village for its ‘outstanding and innovative approach’ to improving the health and lifestyle of local older people.

Mr Smith, who oversees improvements in quality, care and safety across the NHS, was impressed that Bournville Gardens residents’ care needs were proactively addressed by The ExtraCare Charitable Trust, enabling them to remain independent in their own Village homes whilst enjoying a stimulating community lifestyle.

Speaking after his tour of the Village’s 18 health and leisure facilities which include a gym, restaurant, café, IT suite and greenhouse, Mr Smith commented: “I was delighted to visit this ExtraCare Charitable Trust Village which offers an outstanding and innovative approach to helping older people lead better lives. Rarely have I seen older people’s health and care needs integrated with their lifestyle aspirations with such thought and purpose. That's good news for older people and an effective use of public resources. More Villages like this need to be developed and supported."

The Village has provided 549 preventative health consultations to residents through its well-being service since January and also provides personal care and domestic services to 83 people, including those living with early dementia and memory issues.

The ExtraCare Charitable Trust has just won the national ‘innovation’ award at the UK Housing Awards and has been nationally recognised for its research findings with Aston University. The findings showed that residents’ GP visits reduced by 46% over a twelve-month period, depression fell by 64% and unplanned hospital stays came down from 8-14 to 1-2 days.

Bournville Gardens residents with care needs are fully integrated into community life which offers a range of stimulating activities including a choir, walking football, ‘falls prevention’ activities in the gym and a number of community events with market stalls and children’s activities. An opening Community Day and Christmas Fayre attracted over 1,400 visitors from the surrounding community and the Village has regular ‘curry nights’ in the restaurant attended by over 100 residents and visitors including families.

Commenting on the partnership, Peter Hay, strategic director for people at Birmingham City Council, said: “These Birmingham Villages will deliver 1,152 homes for affordable rent and purchase by 2017. In these vibrant communities residents with visiting families and friends can enjoy a sociable lifestyle that reduces isolation and nurtures independence.

“Residents can also access preventative health and care support and enjoy a range of facilities that are fully integrated into the wider community.  Innovative partnerships such as this are the way forward for Birmingham, perhaps for many other local authorities across the country.”

Michael Rickards, now 75, suffered a stroke when he was 39. His wife, Maureen, says it made them realise that life can be uncertain.

“It’s a question of looking forward,” says Maureen. “If I die first, Michael won’t be on his own and he’ll be supported. The whole concept of having everything on site is perfect. The apartment is gorgeous, the building is lovely.  We’ve made so many new friends.”

Peter Roach, chief executive of Bournville Village Trust, said: “As the ExtraCare Charitable Trust has demonstrated through its research, the village model of housing has a fantastic impact on improving older people’s health and we’re pleased that Mr Smith has been able to see and hear about this first hand.

“We’re very proud to be part of the city’s latest retirement village at Bournville Gardens and are looking forward to the ongoing development of the wider Bournville care village, which we believe will be a national exemplar of how to integrate housing, health and social care.”

The tour party also included former secretary of state for health, Stephen Dorrell who is chairman of the Birmingham and Solihull System Board that will oversee the implementation of Birmingham and Solihull’s Sustainability and Transformation Plan - the means by which local government and the NHS aims to improve health and well-being outcomes for local people.