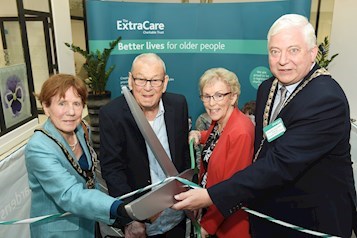 A new £54.5m retirement village has officially opened in High Wycombe marking a milestone for the residents and the town.

The village opened as part of a £54.5m development programme between retirement charity The ExtraCare Charitable Trust and with Buckinghamshire County Council and Wycombe District Council, with a contribution of £1.4m from Homes England through the Department of Health and Social Care’s Care and Support Specialised Housing Fund.

More than 120 older people had moved into Hughenden Gardens Village during the summer with apartments available for outright sale, shared ownership and rent.

They include 88 year old Bryan Walker who moved to the village with his wife Pamela, 78. Bryan lives with a number of chronic health conditions and is receiving care at his new village home. Before the move Bryan was not receiving the help he needed. He says: “It’s wonderful for all sorts of reasons. For me personally, I have all the care I possibly need now and for later life. It’s reassuring and gives Pam the freedom to do her own things.”

The village has 260 one and two bed apartments, and is set across approximately five acres. Facilities include a bar and bistro, village hall, IT suite, hair and beauty salon, gym and shop.

A recent study, with Aston University, found that residents living in ExtraCare’s retirement villages reduced their dependence on GP and hospital services. This means a 38 per cent reduction in NHS costs per person each year. Levels of depression often associated with isolation, mobility issues and poor health reduced by 64 per cent.

The villages integrate lifestyle, homes and care, and are transforming lives for local older. ExtraCare’s villages become social hubs with facilities available to thousands of local people representing all generations across the local community.

The youngest resident to move to the village, 54 year old Richard Nursey, moved after having a stroke late last year which affected his mobility and the accommodation he was in was no longer suitable. He now receives care at the village and says: “I felt trapped before. The facilities were terrible so living here has made a major difference. Everyone is there for you and you can trust them to do what is best for you.”

ExtraCare Charitable Trust Chief Executive, Mick Laverty, said: “As a charity we’re proud that our villages support older people with a diverse mix of interests, circumstances and health needs. We’re pleased to be offering the new residents at Hughenden Gardens Village a secure and comfortable home, with care if they need it. It’s a new kind of retirement living where older people, and their friends and family can enjoy a fulfilling lifestyle as part of a vibrant community.”

Mrs Netta Glover, Chairman of Buckinghamshire County Council, said: “It is a truly wonderful development.  It offers the opportunity to enjoy a fulfilling and interesting life in one’s later years. ”

Cllr Steve Broadbent, Cabinet Member for Economic Development and Regeneration will be at the opening.  He said: “It’s really exciting to see Hughenden Gardens now officially open and to know that already many residents have moved in to make this their new home. This new ExtraCare village is a key part of the council’s vision to bring people and jobs back to this site. I’d like to wish a really warm welcome everyone who has chosen Hughenden Garden Village to be their new home and congratulate ExtraCare on investing in this site and in High Wycombe.”

Carol Cairns, Homes England’s head of home ownership and supply in the South East, added: “We are committed to working in partnership with organisations to secure the delivery of the right kinds of new homes where they are most needed and are delighted to see the completion of this scheme which offers both housing and accessible community facilities for older people in the area.”

A registered charity since 1998, the ExtraCare Charitable Trust operates 18 other retirement villages and schemes across the country, located in central, south and north midlands and the north west and is developing new villages in South Gloucestershire, Bedford and Solihull. Its Lark Hill village in Nottingham, the largest retirement village in the UK, is to feature in the upcoming second series of BAFTA nominated Old People’s Home for 4-Year Olds on Channel 4.

See a short internal fly through of Hughenden Gardens Village at https://youtu.be/6O-0k-xWHs8