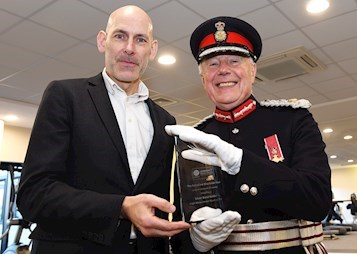 The Lord-Lieutenant of the West Midlands has presented a fundraising award to a local chief executive after he raised £57,000 running the London Marathon to support Midlands-based charity, The ExtraCare Charitable Trust.

ExtraCare Chief Executive, Mick Laverty, who lives in Sutton Coldfield, has been named one of the highest money raisers at the 2019 Virgin Money London Marathon.  Mick was presented with the glass trophy by John Crabtree OBE, Her Majesty’s personal representative in the West Midlands.

Money raised will support the health and well-being of over 1,500 older people living in ExtraCare’s seven Birmingham and Coventry-based retirement villages and housing schemes, as well as the charity’s other retirement communities across the Midlands and North.

“It was my pleasure to present Mick with such an outstanding and well-deserved award,” said The Lord-Lieutenant, who is also is also the Chair of the Organising Committee for the Birmingham 2022 Commonwealth Games.

“To have raised £57,000 for charity is an exceptional effort and one that I’m sure everyone at The ExtraCare Charitable Trust is very proud of.”

The ExtraCare Charitable Trust raised the most money for a ‘Silver Bond’ charity at the 2019 Marathon. There are 550 charities with ‘Silver Bond’ status and holders automatically receive a place in the Marathon every five years (the next place for ExtraCare being due in 2024).

However, in recognition of Mick’s top fundraising achievement, he has also been awarded a place in the 2020 Marathon as well as the glass trophy.

Mick has offered his 2020 place to Birmingham-based staff member, Simon Downtown, who is ExtraCare’s Cluster Contract Manager, based at its 180-home Pannel Croft Retirement Village in Newtown.

Mick, who is also Deputy Lieutenant of the West Midlands, said: “It was an honour to invite The Lord Lieutenant to Pannel Croft Village to present the award.  Being part of the Virgin Money London Marathon really was a fantastic experience and all the funds raised will help provide better lives for older people here in the West Midlands and beyond.

“I’m proud to be passing on the ‘Marathon baton’ and wish Simon the very best of luck at the 2020 event.”

A registered charity since 1988, the ExtraCare Charitable Trust is based in Coventry and operates 20 retirement villages and schemes, located in central, south and north midlands and the north west and is developing a new village in Solihull which opens in 2021. Its Lark Hill village in Nottingham, the largest retirement village in the UK, recently featured in the second series of BAFTA nominated Old People’s Home for 4-Year Olds on Channel 4.

A study conducted with Aston University and Lancaster Universities, published in April 2019, found that residents living in ExtraCare’s retirement villages showed a reduction in their dependence on GP and hospital services, leading to a 38% reduction in NHS costs per year. Residents' levels of exercise increased by 75%, while their anxiety levels dropped by 23%; meanwhile, 86.5% reported never or hardly ever feeling lonely.