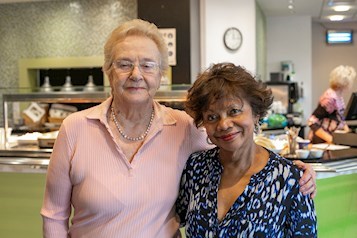 Much has been written about the bond between mothers and daughters, but this Mother’s Day we wanted to explore one mother in-law and daughter-in-law pairing who rival even the closest of parent-child bonds.

When Jini Hodges arrived in England at just 22, the young nurse would have been forgiven for worrying about the familial separation and being so far from home, but instead Jini, a Malaysian native found support, empathy, and love in the form of her future mother-in-law Betty.

Mother-in-law Betty Hodges, 88, who lives at ExtraCare’s Longbridge Retirement Village in Birmingham, and daughter-in-law Jini cemented their bond further when Jini began volunteering at the village where Betty lives. Betty, a Longbridge Village resident for five years, moved to the retirement community with her husband who had dementia. After he passed away Betty found the village to be a safe haven. Jini, 72, began volunteering two years ago, she comments, “I worked in catering before so I began volunteering in the kitchen at the village, working Tuesdays and Fridays. Mum pops down to lunch whenever I’m working. The rest of my family joke that I should move in!”

The strong link between Betty and Jini is apparent immediately upon meeting them. “She gets on with everyone,” Betty says of her daughter-in-law, “she caters to everybody and is so good not only with our family but with the community here too.” For Jini the connection with Betty was instant. When asked about their favourite memory of one another the duo both chose their first meeting. “I have been married 50 years now,” Jini shares. “When I came here from Malaysia I was nursing at St Albans and shortly after met my husband. Mum always made me feel welcome from day one, I’ve always called her mum it felt so natural.”

Betty recalls their meeting similarly, “The moment I saw her I felt for her, she was 23, I knew she was such a long way from her home, I asked my son what she was doing for Christmas and when he mentioned she would be spending it alone I said we had to have her with us. The rest is history.”

So begins a relationship that spans five incredible decades. And what of the duo’s favourite qualities in one another? “Mum always gives her honest opinion, she doesn’t pick sides, she is giving and patient, she is just a wonderful person to talk to,” Jini admits, “With mum, she is truly there for all of us, anything we need, I talk to mum more than anyone, she helps me put the world to right.”

Betty pauses as she gets emotional, and Jini is quick to put an arm around her mum. “I love seeing her on her days working, I come down for lunch and she looks after me and my friend Sylvie, she is such a big family person.”

Jini who has two daughters and two grandchildren of her own adds, “I come to the quiz on a Wednesday night here at the village, if there is an event I encourage mum to come down but to be honest she doesn’t need much encouragement!”

Jini isn’t wrong. Betty takes part in a number of activities at the village, allowing herself one free day, including, curling, bowls, choir, move it or lose it, cuppa and natter, and dancing.

Betty’s 89th birthday falls aptly on Mother’s Day this year alongside her great-great-granddaughter Piper who will also celebrate turning five the same day. “She says we are twins,” Betty laughs, “although I am the older twin!”

And what of the future? “Spending more time together, at the village or a pub on mum’s free day!” Jini laughs. One thing’s for sure there are bound to be many more precious times and family memories where these two women go.

Find out more about living or working at Longbridge Retirement Village. 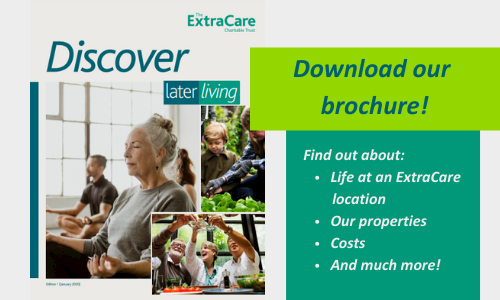