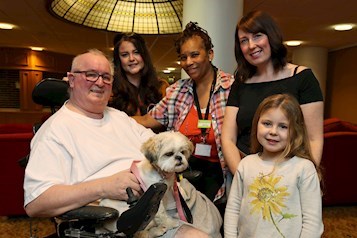 Local police officer Louise Dawber decided to help tackle isolation and loneliness and, together with the help of friends and family, put together between 65 and 70 gift packages for people in New Oscott, Birmingham.

She received the boxes from family and friends after advertising her plans through work and social media.

25 of these boxes went to New Oscott Retirement Village, run by the ExtraCare Charitable Trust, where they were greatly appreciated by staff and residents alike.

Louise said: “I’m not sure what made me think of putting the gifts together, but I’ve done it before and thought it would be nice for some people who wake up on Christmas Day without family around them.

“I brought my five-year-old daughter, Isobel, with me to the village and she was really excited when I explained to her what we were doing. It was more special on Christmas Eve and she loved it.”

Jade Lang, who is part of the Care Team at New Oscott Village said: “Our residents were really overwhelmed with the packages. They were all done up beautifully and included a Christmas card from Louise and Isobel.”

Mona Cook, who received one of the presents, said: “The gifts were really nicely put together and I was really pleased when I got mine. I would like to thank Louise very much.”

The ExtraCare Charitable Trust seeks to combat loneliness and isolation in later life. Research with Aston University into the Charity’s model shows a 14.8% reduction in depressive symptoms over an 18 month period for people living in an ExtraCare retirement village.