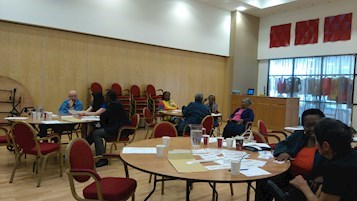 ExtraCare and Cruse Bereavement Care are working in partnership for a five year Bereavement Supporter Project to improve bereavement support for older people, including those with dementia, in sheltered housing.

The project will support residents by:

The first Bereavement Information session took place last week at Pannel Croft Village in Birmingham. A small workshop session was attended by nine residents and two ExtraCare staff members to raise awareness regarding the impact of grief, and how to take care of yourself and help others following a bereavement.

Following the session, 90% of those who attended agreed they now knew how to help themselves cope after a bereavement and 91% felt they understood the impact of grief on emotions, body and mind.

Further Information Sessions will be rolled out at Pannel Croft Village alongside recruitment to a new Bereavement Supporter volunteer role which will provide listening support after a bereavement or loss.