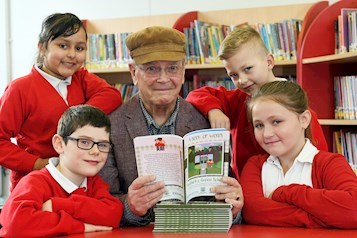 A great-grandfather who is living with dementia has teamed up with local school children in Solihull to create a poetry book that has been officially launched as part of National Story Telling Week.

Bill Cobb, 76, a resident at The ExtraCare Charitable Trust’s Longbridge Retirement Village, has helped youngsters at Haslucks Green Junior School, in Shirley to create a book bursting with poetry. Former policeman Bill taught himself to write poems following his dementia diagnoses in 2018.

The book, titled ‘A Book of Words’, includes dozens of poems which all reflect the values of the school, including happiness, selflessness, kindness and understanding. Proceeds from the book will go towards future intergenerational projects between ExtraCare and younger generations

“As our partnership with ExtraCare has developed, it became crystal clear that our values align very closely with theirs,” said Headteacher at the school, Helen Street.

“Bill and his wife, Ann came into the school on a number of occasions and met the children. He shared some of his own poetry in classes and assemblies, which inspired the children to write their own.”

Great-grandfather-of-two, grandfather of four and father of three Bill, says that he felt an “immediate bond” with the children.

“I was gobsmacked at how talented the children are. Working with them on their poetry makes me feel young again.”

The creation of the poetry book is one of many intergenerational projects ExtraCare are involved with.

ExtraCare’s Intergenerational Opportunities Lead Oyinkan Adesiyan said: “At ExtraCare, we recognise just how important it is for generations of all ages to mix. For older people, spending time with youngsters can bring recognition of their own skills, increase their motivation and reduce social isolation, as well improve health and wellbeing.

“Similarly, for children and young people, intergenerational projects can enhance a sense of social responsibility, while often increasing self-esteem and resilience.

“Projects like the creation of this fantastic poetry book, which is a fun and diverse way to get all ages involved, really showcase the success of intergenerational practice.”

The partnership between the school and the charity blossomed after work began on a brand new ExtraCare retirement village in Solihull.

ExtraCare’s Solihull Retirement Village, which is set to open in 2021, will have 261 state-of-the-art one- and two-bedroom apartments, providing homes for local people aged 55 and over. Care is available to support people who want to remain independent in life.

A registered charity since 1988, The ExtraCare Charitable Trust operates 20 other retirement villages and housing schemes, located in the central, south and north Midlands and the North West and is developing a new village in Solihull. Its Lark Hill Village in Nottingham, the largest retirement village in the UK, recently featured in the second series of BAFTA-nominated Old People’s Home for 4 Year Olds on Channel 4.

The book, which was sponsored by local Shirley solicitors, Wadsworths, can be bought for £5, with all proceeds going towards future intergenerational projects between ExtraCare and younger generations. To buy your copy, either visit Solihull Retirement Village, or email Liz.Hollingshead@extracare.org.uk