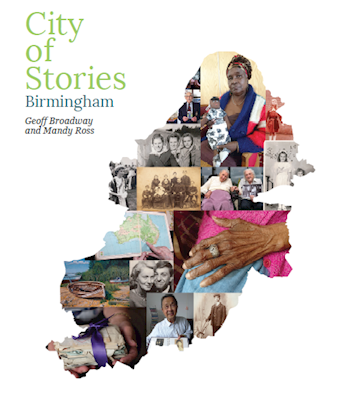 A fascinating book re-telling childhood memories and pastime stories from older residents in Birmingham has been launched today.

A total of 23 residents, who live across The ExtraCare Charitable Trust’s five Birmingham retirement villages, have contributed to City of Stories, with anecdotes coming from either born-and-bred, or adoptive locals.

I was a corporal cook in the Forces for three years. I learned to cook in a 10 – week course. I worked in the officers’ mess in Aldershot, making breakfast, midday and evening meal for about 90. I loved it. – Thelma Thomas, Hagley Road

From the collection of personal stories, readers are given a glimpse at world history, comparing it and making sense of how life is today.

“Collectively these ExtraCare communities from a microcosm of Birmingham itself,” said Birmingham-based author Mandy Ross, who compiled the book with artist and producer, Geoff Broadway.

“We knew that there would be many different stories to discover, and we hoped that people would be glad to share their stories. But we were surprised and delighted by the breadth and diversity of stories we found and by contributors’ readiness to remember and tell.”

Early conversations between Mandy, Geoff and residents, led to the collection of a range of stories, that the duo decided should be published in a book.

“We found that everyone has a story to tell, of a life shaped by individual circumstances, and also be national and international events,” added Mandy.

“As younger people, our identity is often formed by our work, family and interests. One of the things we wanted to explore was how older people identify, how their interests are sustained, and how fresh new threads can develop.”

The book will be officially launched at ExtraCare’s Longbridge Village, on Friday, which will be attended by Labour Parliamentary Candidate for Northfield, Richard Burdon and Counsellor Jayne Francis, as well as many of the residents who contributed to the book.

One of the stories comes from Loretta Matthews, of Pannel Croft Village, who grew up in St Kitts. She tells how she used to make dolls by plaiting tall grasses, while making their house from boxes, with furniture made from matchboxes.

Another, Viv Purcocks, of New Oscott Village, in Erdington, was one of 11 children and he was one half of three sets of twins. He explains how he met his wife, Margaret at a woodworking company, during the war. The couple got engaged six months before Viv joined the RAF and the couple went on to have two children.

While Gill Bywater, who grew up in Northfield, tells how her father wanted a caravan so built one in their back garden.

Qing Yun Yao, of Bournville Gardens, joined The Chinese Army at the age of 12, during the 1950s. As he was too small to hold the weapons, he became a nursing assistant. In 1986, he moved to Birmingham, to work at the university before retiring in 2004.

“At ExtraCare, we actively encourage and empower our residents to share their stories and keep their history and that of their community alive.

“Everyone has a story to tell and this collection of tales really does prove just how unique everybody’s past is.

“We’re very happy that people of all ages in Birmingham and beyond will be able to read and be inspired by these fascinating tales.”

50 per cent of the proceeds from sales of the book will be given to The ExtraCare Charitable Trust, to support the charity’s work. The book can now be bought for £15 by emailing rose.downing@extracare.org.uk