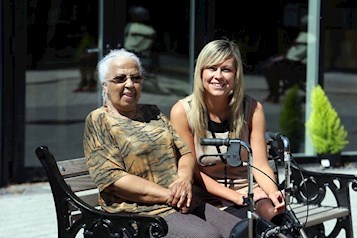 ExtraCare's Well-being Service is Innovation of the Year

ExtraCare's Well-being Service has won Innovation of the Year at the Chartered Institute Of Housing Midlands Awards.

This award recognises organisations that have successfully delivered something which is innovative and can demonstrate a successful service outcome.

The Charity's Well-being Service was the subject of a long-term research project with Aston University, which found that, among other effects:

Find out more about ExtraCare's well-being service and our research with Aston University.

Suzanne Jones, Care Manager at ExtraCare's Hagley Road Village in Edgbaston, Birmingham, accepted the award for the Charity. She says: "Our Well-being Service enhances people's quality of life. Our Well-being Advisors have been able to pick up on previously undiagnosed conditions. We're saving the NHS money and improving our residents' lives."

Professor Lisa Bayliss-Pratt, director of nursing at Health Education England, visited Hagley Road Village and talked about ExtraCare's approach - watch the video or read more about her thoughts on ExtraCare.