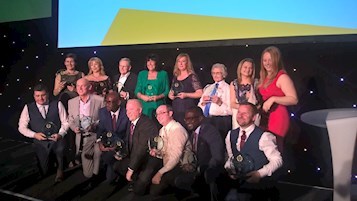 The awards, organised by housing magazine Inside Housing and the Chartered Institute of Housing, recognise work in the UK housing sector.

The award was accepted by Jon Cleaver, a journalist who has volunteered for the team for over 20 years, interviewing customers and liaising with the press.

The team’s stand out work in the last 12 months was the communications strategy around the opening of Bournville Gardens Village in Birmingham. In addition to 95% reservations and a 2,290-household database, the strategy created a 12-month waiting list, enabled 75% of purchase residents to exchange contracts or move in within four weeks of opening and released 108 three- to five-bedroom family homes back into the community.

Residents were linked up with a Birmingham University media graduate to make a short film about transformation in their lives as they moved to the village. This was linked to an open week, including an on-site Housing LIN Conference, NHS and Local Authority professionals’ tour day and official opening. 2,100 stakeholders attended; 900 were community visitors responding to direct mail and social media campaigns.

ExtraCare’s Healthy Lifestyles Team was also shortlisted in the category of Support and Care Team of the Year. This team provides ExtraCare’s award-winning Well-being Service and Enriched Opportunities Programme. Read more about healthy lifestyles at ExtraCare.