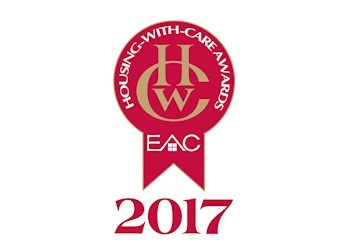 Chris Ridge, ExtraCare’s Customer Services Manager, said: “I was so thrilled and proud to have been there to witness the Schemes receive their awards.

“There were 1,180 different schemes nominated this year compared to just 360 last year, so just to get to the shortlist is a massive achievement.”

They were among 32 developments to have won a top prize out of almost 25,000 retirement housing schemes nationwide.

Elderly Accommodation Counsel (EAC) is a national charity that helps older people meet their housing and support needs. Its website HousingCare.org profiles all retirement housing schemes and care homes in the UK.

The awards, now in their seventh year, celebrate the best specialist housing for older people, and aim to help shape the future of housing in later life through engaging over ten thousand residents, staff, visitors and volunteers who were all able to vote for their favourite scheme out of the 1,180 nominated between 15 November 2016 and 28 February 2017.

John Galvin, EAC’s Chief Executive, explained the importance of the awards: "Specialist housing for older people plays an enormously significant role in helping them stay independent for longer. The security, support and great communities have a positive impact on individuals and reduce the need for NHS services.”