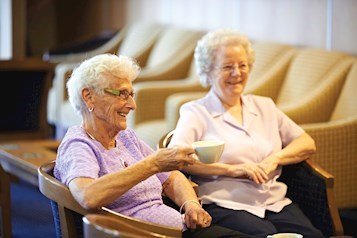 Cruse Bereavement Care is delighted to have been awarded £699,000 from the Big Lottery Fund for a five year Bereavement Supporter Project to improve bereavement support for older people, including those with dementia, in sheltered housing.

The project will be delivered in partnership with The ExtraCare Charitable Trust, a registered charity which operates 31 retirement villages and housing schemes and supports 4,400 older people including those living with dementia.

Anne Townsend, Deputy Chief Executive, said: “We are delighted that with this funding we will be able to extend the services we are able to provide to older people more generally as well as specifically to those with dementia in sheltered housing. Over the last few years concerns about the needs of people with dementia and how to support them has been raised and this project will allow Cruse with its partnership with ExtraCare to extend its work with this vulnerable group of people.”

The Bereavement Supporter project will support the Charity’s residents by:

Shirley Hall, Well-being and Community Manager for The ExtraCare Charitable Trust, said: “We understand how grief and loss can present barriers to older people living a healthy and active life, and we are certain that being able to offer additional assistance at such a difficult time will make a positive difference to many of our residents’ lives. We also welcome the opportunity to work with Cruse specifically around the experience of grief for people living with dementia and continue our previously recognised work in this area.”

“We’re pleased to support Cruse to raise awareness of an issue not often spoken about – how bereavement affects people in later life. This important project will help older people, particularly those living with dementia, access the help they need and build new support networks to better cope with loss and loneliness.”

The Bereavement Supporter Project will initially start at Pannel Croft Village in Newtown, Birmingham which provides 180 affordable homes, care and well-being services and a community lifestyle for local older people.

For any other information about Cruse please contact annabel.phelps@cruse.org.uk or the press phone 07904 662001

The Big Lottery Fund is the largest funder of community activity in the UK. It puts people in the lead to improve their lives and communities, often through small, local projects. It is responsible for giving out 40% of the money raised by National Lottery players for good causes. Every year it invests over £650 million and awards around 12,000 grants across the UK for health, education, environment and charitable purposes. Since June 2004 it has awarded over £8 billion to projects that change the lives of millions of people.

More information can be found at www.biglotteryfund.org.uk