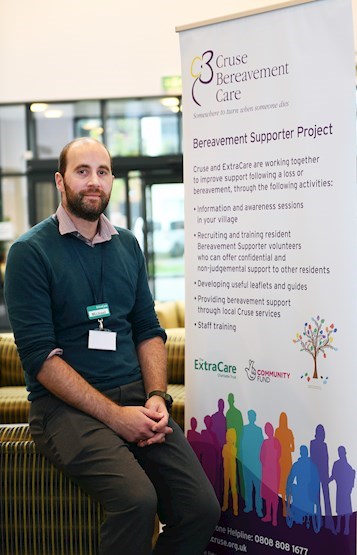 As a five-year-long partnership between The ExtraCare Charitable Trust and national charity, Cruse Bereavement Care reaches its halfway point, the interim results of the project were revealed at an event, which took play at Longbridge Retirement Village today (Friday).

Results show that 86% of the trained residents now feel more comfortable supporting somebody who is bereaved, adding that they had felt increasingly confident in supporting bereaved people.

Already, 47 residents have been trained as bereavement supporter volunteers to date, with another 40 planned to be trained over the next three years.

Janet says her bereavement supporter was “so helpful” that she decided “there and then” that when she had recovered, she would like to do volunteering herself.

“I do like helping people and it gives me great satisfaction to think that I could have people, just in a little way,” added Janet.

The project was launched in 2017, thanks to a grant from The National Lottery Community Fund, after staff at ExtraCare identified the need to better support residents and staff with bereavement; a partnership with Cruse followed.

Michael Spellman, Dementia Lead at The ExtraCare Charitable Trust, said that he is extremely happy with the results.

“The project aims to bridge the gap between residents and speaking about grief. It’s about changing people’s perceptions so that talking about death, dying and bereavement becomes less of a taboo subject,” he said.

“Our communities are vibrant and our residents are involved in a diverse range of life-affirming activities that can include singing, tai chi and wheelchair aerobics, with links into community groups, school and volunteer activities.

“That said, in any community coping with bereavement is also a part of life and it’s important we recognise this openly and provide appropriate support and comfort for those who need it.

”It’s great to hear that the bereavement training is being well received, not only by the volunteers but those on the receiving end too.

“One recipient fed back saying the support she received encouraged her to resume activities she had previously enjoyed, while others said they welcomed having someone who was “trained, caring and non-judgemental to talk to.”

Results from the recent survey also showed that all volunteers now understand grief a lot better, with some residents commending the training for how much they had learnt about bereavement and more specifically, how everyone experiences it differently.

“It’s not just grieving for a person, sometimes people are grieving the loss of a home, a pet, a job – all of which, the trained Bereavement Supporters will be able to support with,” added Michael.

“We really hope that the project empowers residents, encouraging them to support one-another.

“People underestimate how powerful having just a 10 minute conversation with somebody can be but this support can often prevent any further mental health problems, as well as helps people avoid taking anti-depressants.”

As well as bereaved residents, around 200 staff have received loss and bereavement awareness training, many of whom reported feeling bereaved when a resident had died.

“We want to create a bereavement friendly community within our villages,” said Michael.

“Not only does the training offer support to bereaved staff members but it also helps them talk about dying with others, or breaking the news of death.”

Eve Wilson, Bereavement Support Project Manager at Cruse Bereavement Care, said: “We are delighted that so many ExtraCare residents have found the bereavement training helpful and feel more comfortable when supporting others who are grieving.

“It is likely that residents will experience a bereavement during their time at ExtraCare, so it is important peer-support is available to help them through this difficult time.”

Each village or scheme has 5 to 18 social, health and leisure facilities that are accessible to our residents, volunteers and local people representing all age groups living in surrounding communities. Our charity shops help fund care and well-being services for older people living at our each of our locations.

Cruse Bereavement Care is the leading national charity for bereaved people in England, Wales and Northern Ireland. Cruse offers support, advice and information to children, young people and adults when someone dies, and works to enhance societies care of bereaved people.

Cruse offers face-to-face, telephone and website support. It has a free National Helpline (0808 808 1677) local services and a website specifically for children and young people called Hope Again. Its services are provided by trained volunteers and are confidential and free. Cruse also provides training and consultancy for external organisations and for those who may encounter bereaved people in the course of their work.