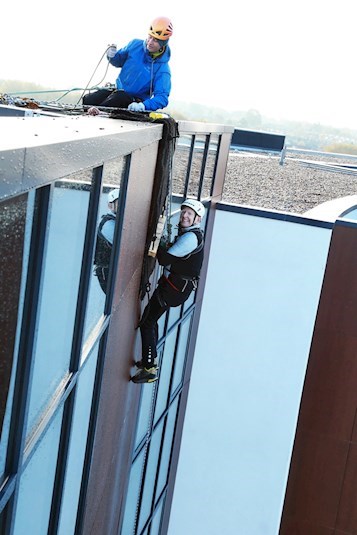 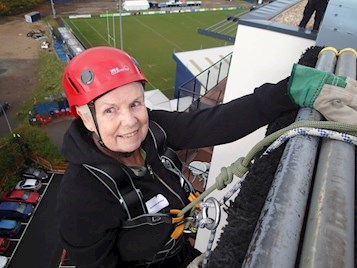 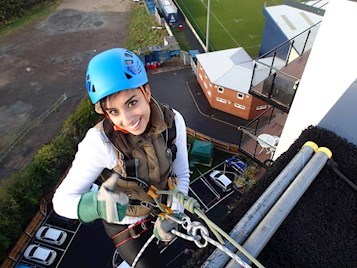 Two residents of Earlsdon Park Retirement Village have abseiled down the 10 storey building as part of a community partnership between The ExtraCare Charitable Trust and Coventry Building Society, to raise money for the charity’s four Coventry locations.

The total amount raised was £8,300 and all proceeds will be shared among four ExtraCare locations in Coventry, including Earlsdon Park, Willowbrook, Princethorpe Court and Humber Court.  Each has submitted a “wish list” of what they plan to do with the money, including equipment to help foster independent living and things like transport for Christmas activities.

Residents Barrie Pountney, 69, and Maureen Morris, 75, were joined by 43 others at the abseil, including 25 volunteers from CBS and 18 from ExtraCare.

Maureen, who had never abseiled before, said: “I thoroughly enjoyed it, it was a brilliant day and the views of Coventry from the roof of Earlsdon were fantastic.  I was a bit apprehensive going over the edge but after that I was fine!”

Barrie also commented on the day, saying: “It was brilliant, I really enjoyed it and I was definitely more excited than nervous.  It was a bit different from abseiling down Snowdon!”

The event was the first fundraising activity since the Coventry’s Direct Mortgages team nominated ExtraCare as their Community Partner. The Coventry’s scheme encourages branches and head office areas to work with a local charity or community group to raise money and awareness and volunteer for their partner.

Staff from the Coventry have also been raising funds for ExtraCare through charity shop collections and cake sales. Shanila Yasmeen, Telephone Mortgages Coordinator and the team’s Community Champion, said: “We’re looking forward to doing some volunteering with ExtraCare, and we were able to raise even more for them with the abseil event. The team were all pretty nervous but it was worth it to help a group who do such fantastic work in our local community.”

Both Coventry Building Society and ExtraCare hope this will be the launch of many more opportunities to fundraise together for the benefit of the people of Coventry.