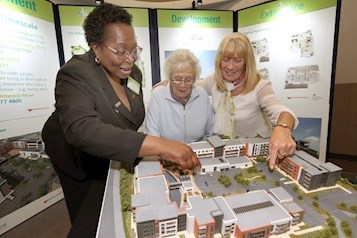 Hundreds of local people have attended information days to find out more about the new Longbridge Retirement Village, due to open near the new Town Centre in 2017.

The £35 million retirement village in Longbridge will be the Charity’s fifth in Birmingham, with options to buy, rent and part purchase, alongside a superb range of community social, leisure and well-being facilities.

In the Village centre will be a gym and well-being centre, bar and café bistro, shop, hair and beauty salon, village hall, craft and hobby studio, IT suite and library and large-scale greenhouse.

Two of the people attending were mother and daughter Phyllis Baker and Marie Crates. Phyllis, an 85 year old widow, moved in with her 63 year old daughter, who is divorced, five years ago. Marie, a former nurse, said the Village would be ideal for both of them.

“Mum is finding the stairs difficult and she is isolated,” she said. “She worries when I’m out. The least little noise frightens her.

“Mum has worked all her life. I have taken a bit of her independence. I do everything in the house. Mum needs support getting washed and dressed. I think living in the Village would mean that she would be more independent.

“You can’t get anything better than this type of Village as you get older!”

Approximately a third of residents within the Village will receive help with care. Dependent on individual circumstances, the Village can support residents with significant assessed care needs, including dementia.

A ground-breaking three-year study with Aston University recently found that care costs are slashed by more than a third and health benefits soar as a result of ExtraCare’s successful combination of health, social care and housing services for older people. Find out more at www.extracare.org.uk/research

Around 200 jobs will be created during construction of the Village, which began in February. There will be a further 30 jobs when the Village opens in 2017.

Each apartment will have its own hallway, living room, one or two bedrooms, kitchen and shower room. The majority will also have their own balcony.

Applications for homes at the Longbridge Retirement Village will open next year, but people interested in living in the Village can register their interest by phoning 0870 777 4800.

About The ExtraCare Charitable Trust: The ExtraCare Charitable Trust enables older people to enjoy a healthier, active and more independent lifestyle in a network of inspirational communities. Founded in 1988, ExtraCare is a registered charity based in Coventry. It operates 3,831 homes within 14 retirement villages and 17 smaller housing developments across the Midlands and the North. Each Housing Scheme or Village has a host of social, health and leisure facilities that are accessible to over 4,400 residents and up to 5,000 older people living in surrounding communities.

ExtraCare's five-year strategy includes a £200m development programme to complete at least five Villages in Birmingham with the City Council, as follows: