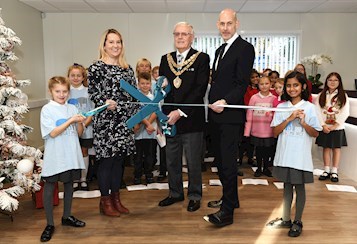 The £61.5million village, a partnership between registered charity, The ExtraCare Charitable Trust and Solihull Metropolitan Borough Council is being built on nearly four acres of land, formerly the Powergen site in Shirley, between Stratford Road and Haslucks Green Road.

Pupils from the local junior school helped visitors get in the festive spirit before joining Councillor Davis to officially cut the ribbon and open the show home.

Headteacher Helen Street said: “It has been our privilege over the last year to work closely in partnership with ExtraCare.

“As our partnership has developed, it has become crystal clear that what we are wanting are the same things. Better lives for our older people and better lives for our younger people. The values which we both strive towards: compassion, empowerment, collaboration  are  values which can be passed from generation to generation – and hopefully make the world a better place.

“Our partnership has undoubtedly strengthened the bonds between the younger and older generations in the best way possible enabling both young and old to be 'the best that they can be'.”

Children from Haslucks Green Junior School have been involved in an intergenerational project with residents from ExtraCare’s nearby Longbridge Village. Together, they have produced a poetry book, which will raise funds for future projects between the children and Solihull Retirement Village.

Already, 1,500 households have registered their interest in the village, which will be open in 2021, providing 261-state-of-the-art one- and two-bedroom apartments for local people aged 55 and over. Homes will be available for purchase and rent, with Homes England providing £2.5 million to support affordable housing within the village. Care and well-being services will be available to help people remain independent in later life.

“At this village, our aim is to empower older people to be at the heart of community life, sharing interests and sociable activities with opportunities for volunteering too.”

Councillor Ian Courts, who also attended today’s event, said: “It’s fantastic to see the progress made with ExtraCare’s retirement village, here in Solihull. This will be a great development for the people of Solihull and it is heartening to see the investment that is being made locally in new home for the retired community.

“I’m confident the village will become a key asset of the Solihull area, bringing residents and the community, of all ages, together.”

A study conducted with Aston University and Lancaster University, published in April 2019, found that residents living in ExtraCare’s retirement villages showed a reduction in their dependence on GP and hospital services, leading to a 38% reduction in NHS costs per year. Residents’ level of exercise increased by 75%, while their anxiety levels dropped by 23%; meanwhile, 86.5% reported never or hardly ever feeling lonely.