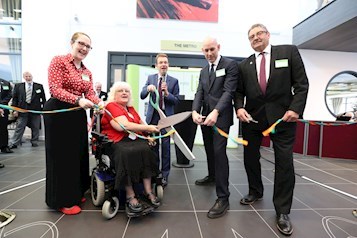 A new £48m retirement village officially opened in Birmingham today marking a milestone for the residents and the city.

Longbridge Retirement Village is on the site of the former Austin Rover car factory where some of the residents used to work.

It is also the fifth of five retirement villages to open in Birmingham as part of a £250m development programme between retirement charity The ExtraCare Charitable Trust and Birmingham City Council. The Homes and Communities Agency (HCA) has also provided £1.5m to support affordable housing in Longbridge Village.

Birmingham City Council’s cabinet member for housing and homes, Cllr Peter Griffiths, also attended. He said: ‘This is the largest retirement village project of its kind in the UK and these innovative communities show Birmingham leading the way for others to follow. Thanks to our partnership with ExtraCare, we have been able to provide thousands of quite exceptional and affordable new homes for older people across the city. These homes ensure residents can become more independent and increase their levels of fitness. They also free up much needed larger family homes across the city and help us to provide housing for a range of needs.  I am delighted that this fifth retirement village in Longbridge is open and it’s wonderful to see at first hand the impact it has already made on people’s lives in the area.’

Hundreds of older people have moved into Longbridge Village during the summer with apartments available for outright sale, shared ownership and rent.

They include 64 year old Yvonne Bainbridge whose father was a foreman in the Austin Rover plant. Yvonne, who uses a wheelchair, is receiving care at her new village home. Before the move she was living alone, lonely and frightened. Now she is in a two bedroom rented apartment at the village. ‘It is life changing to be in this place,’ she said. ‘I’m safe, the care is brilliant, I’m meeting lots of people, and I’m enjoying lunch clubs and classes. It has made my life worth living.’

A specially formed heritage group, including local historians, helped to inspire the design of Longbridge Village. A replica of a Mini takes pride of place on the wall in the entrance, and street names include Metro Close and Allegro Avenue.

The village has 260 one and two bed apartments, and is set on five acres fronting Lickey Road on the edge of Longbridge Town Centre.

Facilities include a bar and bistro, village hall, IT suite, hair and beauty salon, gym and shop.

A recent study, with Aston University, found that residents living in ExtraCare’s Birmingham villages reduced their dependence on GP and hospital services. This means a 38 per cent reduction in NHS costs per person each year. Levels of depression often associated with isolation, mobility issues and poor health reduced by 64 per cent.

The ExtraCare Charitable Trust has already opened four other retirement villages in Birmingham: New Oscott, Pannel Croft in Newtown, Hagley Road Village in Edgbaston and Bournville Gardens, and has provided more than 1,000 homes across the city.

The villages integrate lifestyle, homes and care. They are transforming lives for local older people and they have also freed up much needed family housing – over 750 family homes. They have also become social hubs with facilities available to thousands of local people representing all generations across the local community.

‘As a charity we’re proud that our five Birmingham villages support older people with a diverse mix of interests, circumstances and health needs.

‘Many residents moving into this village have worked in Longbridge and spent their working lives supporting this city’s success. We believe these and other Birmingham residents will be able to enjoy a fulfilling lifestyle as part of a vibrant community.  They deserve it.’

Caroline Cormack, Head of Home Ownership and Supply for the Midlands at The Homes and Communities Agency (HCA), said: ‘We’ve provided both land and funding for the Longbridge Retirement Village so it is great to see the scheme fully open and residents enjoying their new homes. The retirement village is just part of the overall regeneration of the Longbridge site and is a great example of the HCA’s work to support older people though high quality homes and living environment.’

See case study and video interview with residents Lynne and Val at https://www.extracare.org.uk/newsroom/extracare-resident-stories/longbridge-village-lynne-chalk-and-val-mcbride/

The five Villages in Birmingham are as follows: