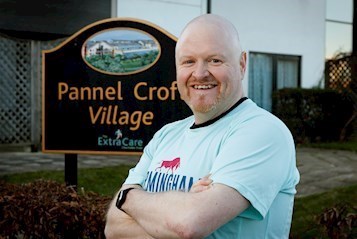 ExtraCare's Cluster Contract Manager will be running the Virgin Money London Marathon at the start of next month while raising vital funds for ExtraCare.

Simon Downton, 40, is based at ExtraCare’s Pannel Croft Village. The marathon is a personal goal as well as a professional one for Simon who is a father-of-one, from Castle Vale, in Birmingham. Once weighing in at 21-stone and feeling unfit and unhappy he decided something needed to change and began running. “I decided to make the change and get healthy, for the sake of my son Daniel who I found it hard to keep up with” says Simon.

“In the first two years, I lost six stone, through a change in my diet, more exercise and thanks to my workplace Pannel Croft's 'Biggest Loser' initiative I was able to keep on track! Back then, if somebody had told me I would be running a marathon, I would have laughed but here I am today, training almost every day ahead of this once-in-a-lifetime challenge.”

The Virgin Money London Marathon was on Simon’s bucket list and something he has dreamed of taking on since he began his journey to a healthier lifestyle. He initially signed up for the race last year and had to complete it virtually due to the COVID-19 restrictions. He achieved an impressive time of 4 hours and 38 minutes. This time around he will be running the 26-mile route from Greenwich to the finish line on The Mall in London.

Simon feels passionate about fundraising for a charity he deeply believes in. “They provide a great community for older people and I really believe in their vision: to create better lives for older people.”

He adds; “We’re like a family here, residents, staff and volunteers, so I’ll definitely be wearing the ExtraCare logo with pride when I run and the more money I raise, the better.”

Simon will be following in the footsteps of ExtraCare's CEO Mick Laverty who ran the 26-mile route and raised £57,000 for the charity, with a time of 4 hours and 30 minutes in 2019.

Being a Silver Bond charity, ExtraCare are awarded a place in the London Marathon every five years. However, thanks to Mick’s outstanding fundraising achievements, The ExtraCare Charitable Trust were guaranteed a place at this year’s event.

Training is going well and Simon is hoping to be up to 28 miles in the coming weeks, by running on Sunday 3rd October and also running the Manchester Marathon the following weekend.

“Running a marathon is important to me, it shows others that if you put your mind to something and back that up with hard work this really can be achieved.” Simon concludes.