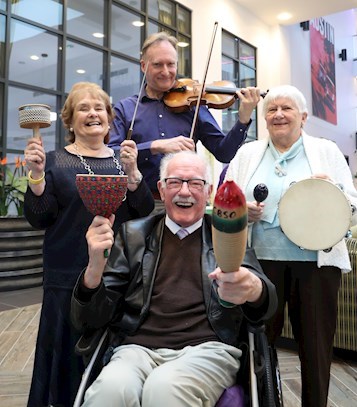 Musicians have been making a difference to the lives of people living with dementia and memory issues at the ExtraCare Charitable Trust’s retirement villages in Birmingham.

Musicians from the City of Birmingham Symphony Orchestra have delivered a series of workshops at ExtraCare’s five villages in the city, working with residents and their carers.

The ExtraCare Charitable Trust is fundraising to support the initiative.

Pauline Joy, aged 72, has been diagnosed with Alzheimer’s and lives at Longbridge Village along with her husband Richard. They both attended the workshops.

‘As soon as the music started Pauline seemed like a different person, a big smile came,’ said Richard, aged 66, ‘She was enthusiastic and it was tremendous to see her so relaxed.’

Don Bird aged 85 and his 83 years-old wife Theresa also went along to the workshops at Longbridge Village. ‘Just after we moved into the village Don was diagnosed with the beginning of dementia and his memory has got worse,’ said Theresa.

‘Don and I have always liked music. Don used to play the piano and there’s an electric organ in our hallway, but he has macular degeneration and can’t see the keys and so he doesn’t play it now.

‘The CBSO musicians came to the village for a series of workshops and they were excellent. I used to find myself looking forward to the workshops.

‘Don would come out of the workshops brighter, even ready to have a meal in the restaurant although he’s not a great eater. It was absolutely super.’

The sessions are improvisation-led, with residents communicating their ideas through rhythms, discussion and using instruments.

CBSO violinist David Gregory said: ‘We have met some wonderful individuals on this project, whose characters really shine through in the music we make. Whatever stage they are at with their condition, we are all equal in the circle, communicating with music instead of words. ‘

Preya Chauhan works at the charity’s Longbridge Village and is a specialist supporting residents living with memory issues and dementia. She said: ‘The CBSO musicians have a transformative impact on our residents’ lives. When we all come together to make music the effect is magical.’

Residents have also enjoyed chamber music performances from CBSO Ensembles within the village, as well as a programme of relaxed concerts.

The CBSO Baroque Ensemble will be at Longbridge Village on Monday May 21st from 3-4pm for an afternoon of world class baroque music.

ExtraCare’s work with the CBSO is one of many on site activities at the charity’s villages which have included the Birmingham Jazz festival, resident choirs, Zumba, Tai Chi and wheelchair aerobics.

A three year study with Aston University has found that the impact of The ExtraCare Charitable Trust’s integrated housing, care and lifestyle model delivers significant improvements in psychological well-being, memory and social interaction.

In 2016 the charity won ‘Outstanding Approach to Innovation’ at the UK Housing Awards for its work supporting residents living with dementia.

Each village or scheme has 5 to 18 social, health and leisure facilities that are accessible to our residents, volunteers and local people representing all age groups living in surrounding communities. Our Charity Shops help fund care and well-being services for older people living at our each of our locations. www.extracare.org.uk

About the City of Birmingham Symphony Orchestra (CBSO)

Based at Birmingham’s spectacular Symphony Hall, the City of Birmingham Symphony Orchestra and its ensembles give over 150 concerts each year in the UK and worldwide, playing a wide range of music including everything from Wagner operas to world premieres, film music and family concerts. With a far-reaching education and community programme, four choruses and a Youth Orchestra, it is involved with every aspect of music-making in the Midlands.  But at its heart is a team of 90 superb professional musicians, and a 98-year tradition of making the world’s greatest music.

The orchestra was founded by future Prime Minister Neville Chamberlain in 1920, and Elgar conducted its inaugural concert. But it was when it discovered the young British conductor Simon Rattle in 1980 that the CBSO became internationally famous, and showed how the arts can help give a new sense of direction to a whole city. Rattle’s successors Sakari Oramo and Andris Nelsons cemented that global reputation, and continued to build on the CBSO’s distinguished tradition as one of the UK’s leading musical ambassadors.

Under the artistic leadership of Osborn Music Director* Mirga Gražinytė-Tyla the CBSO will continue to do what it does best – playing great music for people in Birmingham and beyond. As it approaches its centenary in 2020, the CBSO remains one of the most vibrant cultural organisations in the UK.

*The position of Music Director is generously supported by John Osborn.