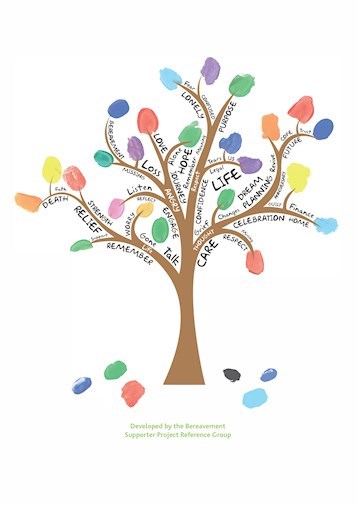 2020 has forced many of us to live a parallel mental life of ‘should have beens’ in our heads. Paper or online diaries give us (sometimes unwelcome) reminders of what we no longer have.[i]

The diaries have shown us the huge amount of self-organised, mutual aid and support across the villages, to which the Bereavement Supporters themselves have been integral.  Certainly, the physical community of each village has been profoundly undermined by social distancing measures with closure of gyms, catering services, and public amenities beyond the villages. Wellbeing services have been delivered remotely or online and some front-line staff have been self-isolating. There has also been building work at some locations at a time when people can’t leave their apartments, which has proved troublesome. Despite all of these challenges, a sense of supportive community persists and Bereavement Supporters have worked hard at sustaining that sense of togetherness during the pandemic.

Bereavement Supporters have been well placed in identifying fellow residents who are emotionally vulnerable, particularly during ‘lockdown’ and have provided essential continuity of social care at a time when it was not available elsewhere.   They achieved this by adapting their support (for example, by moving to telephone support), and looking out for people known to them in their community. They encouraged ‘chains’ of telephone calls among residents in their own village: "Contacting people on my list, listening and encouraging, and taking every opportunity to talk to those I meet."[iii]

"The fallout [from C-19] is immense throughout the Village and good to share that sense of loss of holidays, special birthday celebrations and short breaks. Being able to talk things through and share stories with others has been helpful."[iv]

The primary resource the Bereavement Supporters have been utilising in supporting their community during 2020’s pandemic has been listening, which has: "become even more evident in meeting up with others this past month. We don’t have the answers, but we can stand, or sit, alongside others."[v]

In addition to offering emotional support for up to an hour on a weekly basis to fellow residents, either face-to-face or over the telephone, one Bereavement Supporter cooked meals for other residents and two others in another village went to incredible lengths to make phone calls to over 60 people in their community; a huge amount of effort and time invested in looking out for their neighbours’ wellbeing. The Bereavement Supporters have proven themselves to be essential in-house volunteers supporting those in their residential community; the “invisible Cinderellas” to the 2020 Ball!

One thing that many people have had to face during the pandemic is the absence of normal grieving and remembrance practices. Some of our diarists told us that for some people having a reason to withdraw from public life was helpful to their bereavement.  They felt less pressure to hide their emotions. For others, the absence of opportunities for collective remembrance was very keenly felt.  The Bereavement Supporters have been especially mindful of this and have gone to great lengths to replace different kinds of remembrance experiences, such as ringing around for residents to come onto their balconies and sing songs and hear eulogies:

"They had a prayer, then they sang some songs and talked about her for fifteen minutes and then the hearse came round and stopped for a bit.  It was very moving. Very, very moving."

The Bereavement Supporters have also been heavily involved in wider activities in their village community - gardening public spaces, the Residents’ Association Committee, conducting church services and lay preaching, organising the circulation of cards and services to other residents and supporting craft groups: "Yesterday I was able to re-introduce knitting to a lady who is registered blind ... big needles, thick wool and using her memory of knitting along with 'feeling' her way...."[vi]

We have all been feeling our way through 2020 and perhaps reflecting on changes that need to be made in moving forward in our lives and communities. So, it is hardly surprising that

Bereavement Supporters have been using the diaries project as an opportunity for reflection.

"The reasons that many of us chose to come to the Village were suddenly negated and taken from us. Everything seems to have been put on hold…of ‘a big STOP sign’ introduced into our lives. Most of our residents delved deep inside of themselves and found the resources they needed to get through by using the strengths they have learnt through the past experiences of life." [vii]

Yet, looking ahead to imagine a better future, a Bereavement Supporter reflected in their August diary that: "The past, the old normal, was not perfect. Slavishly going back to normal, here or in the wider world, is not necessarily good. The slogan should be Build Back Better." [viii]

That is exactly what the Bereavement Supporters have shown to themselves to be doing; quietly contributing to developing a stronger, supportive community in their own village through challenging times.