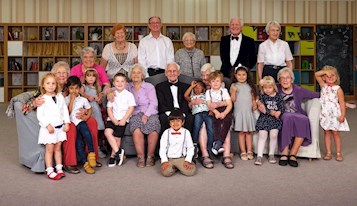 The second series of the upcoming Old People’s Home for 4 Year Olds is to delve into the effect of intergenerational contact on the very young and very old.

This year, Channel 4 teamed up with The ExtraCare Charitable Trust, a registered charity that exists to enable better lives for older people, for its BAFTA-nominated, ground-breaking documentary due to broadcast at 9pm on Monday 8th October for five weeks.

This second series sees a nursery created within ExtraCare’s Lark Hill Retirement Village in Nottingham, one of the largest retirement communities in the UK and home to more than 420 residents ranging in age from 60-102. Ten older adults from Lark Hill and ten four year-olds took part in the three month experiment – in a specifically built nursery where the classmates shared daily activities together.

In episode one we are introduced to 102-year-old Sylvia who was born during WW1 and who gave birth to her first child during the blitz in WW2 and we meet 97-year-old Victor who at 18 found himself on the beach at Dunkirk. There’s also a blossoming friendship between 4-year-old Scarlett who lost her Mum when she was only three and shy 84-year-old Beryl.

The ExtraCare Charitable Trust’s Chief Executive, Mick Laverty said: “We’re so pleased to have had the chance to work with Channel 4 on this ground-breaking series. It’s exciting to see the positive effect that spending time with the children has had on those residents involved. As a charity we exist to enable better lives for older people which is why we’re committed to continuing our intergenerational work.

“We already know from research with Aston University that our unique approach to homes, lifestyle and care, if needed, reduces the symptoms of depression so often linked to isolation, mobility issues and loneliness for residents in our villages.”

Residents at ExtraCare’s retirement villages enjoy a range of intergenerational activities. They have visited local schools to listen to pupils reading and help with work. Children have attended craft classes run by residents. And at its Longbridge Village in Birmingham an established Stay and Play group meets weekly which sees residents mixing with children just a few months old. As a result of the social experiment the charity has pledged to roll out a wider programme of intergenerational activity across its villages and is encouraging people to take a moment to spend time with others outside of their age-group.

The TV show, inspired by last year’s experiment in Bristol, runs for twice as long and stretches the stamina of the participants who are much older. A team of geriatric specialists measure the impact of the intergenerational activity, focusing on mood, memory and mobility and for the first time, the effect on the children is also assessed.

For case studies or interview opportunities with the ten older people, please contact Cheryl Flounders at cheryl.flounders@extracare.org.uk or on 02476 507 917.