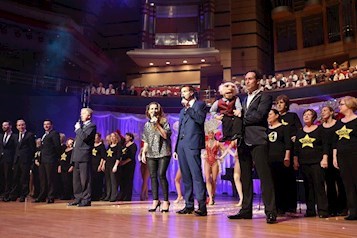 X Factor winner Sam Bailey, Britain’s Got Talent finalists Richard and Adam, and singers the New Jerseys entertained the audience, and choirs from ExtraCare’s Schemes, Villages and Head Office also joined together to provide a medley of show tunes.

Residents from ExtraCare’s Villages and Schemes across the country attended the concert, including several residents who moved in to Bournville Gardens in Birmingham when it opened earlier this month.

Around 40 future residents of Earlsdon Park Village, due to open in Coventry in Summer 2016, also enjoyed the show, and a trip around Birmingham’s German Christmas market beforehand.

Village Manager Mary Higginson said: “For the Earlsdon Park staff here today, it’s our first Symphony Hall, but some of our residents came last year. Everyone has really been looking forward to this – there was a lot of excitement on the coach coming here!”

ExtraCare’s Activities Manager, Donna Ball, who arranged and hosted the show, wowed the audience by arriving on stage on roller skates, and made 11 costume changes!

Don Osborne, a resident at New Oscott Village, said: “I’ve come here for nine years – I couldn’t say which year has been the best, they’ve all been excellent! This year’s was great, I can’t think of anything I didn’t like.”