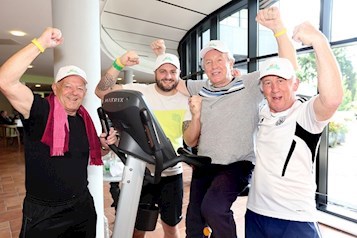 The events coincided with new research, commissioned by the Associated Retirement Community Operators (ARCO), the UK trade body for retirement communities, which has revealed that 63% of older people in Birmingham would like to be more physically active.

At Pannel Croft Retirement Village in Newtown, residents, friends and staff travelled a total of 78 miles, by running, cycling and rowing on equipment in the gym.

Residents and friends of Hagley Road Village in Edgbaston travelled 30 miles in under two hours using a static bike.

Dan Height, Fitness Instructor at Hagley Road Village, said: ‘Birmingham is leading the way in terms of providing active and affordable retirement communities for older people. Many residents and staff get involved in physical activities here as part of a regular programme of health and well-being.     ARCO’s research proves that this generation of retirees want to continue being active for as long as possible and we need to support them achieve this.’

The ARCO research also revealed that in Birmingham 30% of people aged 65 or older identify themselves as ‘not very’ or ‘not at all’ active. This corresponds with the national picture, where the average answer was over a third (1).

With the NHS recommending around 2.5 hours of moderate exercise and muscle strengthening per week for over 65s, the survey highlighted that older people may need more support to maintain active lifestyles.

1,000 people over 65 were surveyed across the UK. 70% of all respondents stated that they wished they were more physically active. In Birmingham, this figure was 63%.

Nationally, of those who were less active and who wanted to be more active, nearly one in four(2) indicated they did not use nearby facilities due to feeling self-conscious in environments (such as gyms) often dominated by young people. In addition, physical barriers also played a part, with over 37% of all respondents reporting medical reasons or injury as the main reason stopping them from exercising more.

Earlier in the year, research by Aston University found that health care costs for residents in extra care villages run by The ExtraCare Charitable Trust are reduced by 38%. It also found that unplanned hospital visits fell from 8-14 days to 1-2 days after 12 months of living in an ExtraCare Charitable Trust location, and even routine GP visits were reduced by 46% thanks to on-site wellbeing services.

Angela Bradford, Commissioning and Healthy Lifestyle Director at The ExtraCare Charitable Trust, said: “Our Charity’s health and wellbeing services are integrated into older people’s lifestyle aspirations and this means that they are living well for longer at a cost that is affordable for the individual and society.”

(1) 34% of respondents across the UK aged 65 or older identify themselves as ‘not very’ or ‘not at all’ active.

(2) 22% of those who want to be more active listed their reasons for not using nearby facilities as feeling self-conscious in environments such as gyms often dominated by young people.

Research commissioned by ARCO, and conducted by Censuswide with 1,000 over 65 year olds. The survey complies with the MRS Code of Conduct.