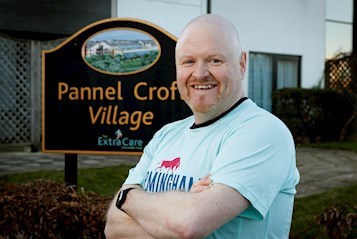 A man who shed nearly six stone in two years after taking on running is fulfilling his dream of running the Virgin Money London Marathon while raising money for the charity he works for.

Simon Downton, 39, who works at The ExtraCare Charitable Trust, will be taking on the 26-mile route in April, a challenge he would have “laughed at” four years ago.

The father-of-one, of Castle Vale, in Birmingham, initially set out to lose weight to be a healthier dad. In 2016, he drastically changed his diet and tried running for the first time.

“Running The London Marathon before I hit 40 is definitely on my bucket list,” says Simon, Cluster Contract Manager, who is based at ExtraCare’s Pannel Croft Village, in Birmingham.

“If you’d have told me four years ago that I would be running 26 miles, I would have giggled and told you not to be so daft but here I am, it’s fantastic.”

Within two years, Simon, who starting weight was 21-stone, had lost five-and-a-half-stone and now regularly runs Half Marathons, Park Runs and 10km routes.

“My weight had gone beyond a joke; I was that man who had to wear shorts in the winter because I would sweat so much,” added Simon, who now weighs an impressive 14 stone.

Simon has been passed the ‘Marathon baton’ by ExtraCare’s Chief Executive, Mick Laverty, who completed the famous route in four hours and 30 minutes in 2019. Mick raised £57,000 for the Dementia and Wellbeing Services at the charity, which operates five Birmingham retirement villages, that support more than 1,400 residents.

“Of course, I’d love to beat Mick’s time, but I’d be happy if I did it in five hours,” said Simon.

“I’ve got my target and I’m confident I’ll do it; most of all though, I just want to enjoy it.”

Being a Silver Bond charity, ExtraCare are awarded a place in the London Marathon every five years, with the next one due in 2024. However, thanks to Mick’s outstanding fundraising achievements, The ExtraCare Charitable Trust have been given an extra place at this year’s event, as well as a special award in recognition of being the highest fundraising Silver Bond charity.

Simon and a handful of others put their names forward to run this year, with the chosen runner being picked at random by ExtraCare’s Senior Management Team.

Having worked at The ExtraCare Charitable Trust for the past four years, Simon says he was ‘extremely excited’ about being chosen to run and feels passionate about raising money for the charity.

“ExtraCare provides a great community for older people, I really believe in their ethos,” he added.

“I’ve seen people who move in, who were once frightened to leave their house and now, they’re so sociable. ExtraCare can really help, as much or as little as people want them to.

“We’re like a family here, residents, staff and volunteers, so I’ll definitely be wearing the ExtraCare logo with pride when I run and the more money I raise, the better.”

A registered charity since 1988, the ExtraCare Charitable Trust is based in Coventry and operates 20 retirement villages and schemes, located in central, south and north midlands and the north west and is developing a new village in Solihull which opens in 2021. Its Lark Hill village in Nottingham, the largest retirement village in the UK, recently featured in the second series of BAFTA nominated Old People’s Home for 4-Year Olds on Channel 4.

A study conducted with Aston University and Lancaster Universities, published in April 2019, found that residents living in ExtraCare’s retirement villages showed a reduction in their dependence on GP and hospital services, leading to a 38% reduction in NHS costs per year. Residents' levels of exercise increased by 75%, while their anxiety levels dropped by 23%; meanwhile, 86.5% reported never or hardly ever feeling lonely.