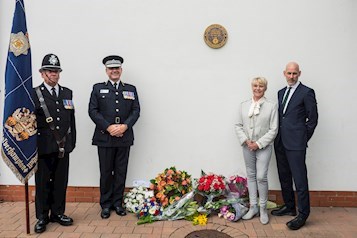 A plaque was unveiled yesterday at ExtraCare Pannel Croft Retirement Village, in Birmingham, in memory of PC Snipe, the local Police Officer, who was killed on the spot where the village is now built, more than 100 years ago.

The marble and gold plaque in memory of Constable George Snipe, who was murdered in 1897 was unveiled yesterday (Wednesday 25th September) in an event organised by The Police Memorial Trust, at Pannel Croft Village, in Newtown.

On 19th July 1897, Constable George Snipe was on patrol in Birmingham City Centre when he was called to a drunken disorder at a pub in Bridge Street West.

After getting to the pub, he and a colleague, arrested a couple of men and as the officers walked away, the mob attacked them.

In the attack, Constable Snipe was hit on the temple with a brick and sadly died a few hours later.

ExtraCare Chariatable Trust Chief Executive Mick Laverty said: “It is an honour for everyone at ExtraCare and especially Pannel Croft Village, to be a part of this beautiful service to remember a local Police Constable, who sadly died while on duty.

“We always look for opportunities to link our villages with the history of their local community.

“We have some 4,500 residents at ExtraCare, some of whom are former Police Officers, so having this plaque at one of our villages, is especially poignant and special.”

This is the 50th Memorial organised by The Police Memorial Trust, an organisation that helps remember Police Officers who have lost their lives in the course of hazardous duties.

Chair of The Police Memorial Trust, Geraldine Winner said: “It is important for the Police family to know that officers who lose their lives in the course of their duties will be remembered.

“We know, from our contacts with the family, whether it is recent tragedy, as is the case of PC Harper, in Themes Valley, or the relatives of those like Constable Snipe, that memorial events like these bring some small comfort that their loves ones sacrifice will not be forgotten.”

“It is a timely reminder to us all of the risks that Police Officers take daily,” added Geraldine.

“What we are here to say to PC Snipe and to all other Police Officers throughout the land, are just two words that comes from the heart and that’s thank you.”

Chief Constable Dave Thompson spoke at the event, saying how important it was to remember “our earliest officers” with admiration.

“Today, we proudly mark the memory of PC Snipe, as a man, a colleague and as a brave citizen.

The plaque will now be placed in the village grounds, for residents, families, visitors, staff and volunteers to view.

The Police Memorial Trust made a generous donation to Pannel Croft, which will now be used towards facilities for the residents.