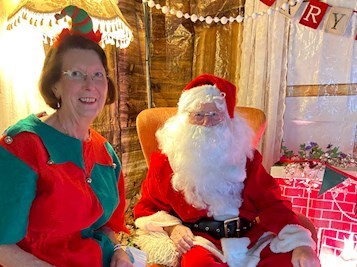 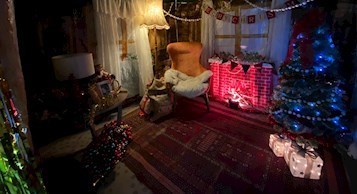 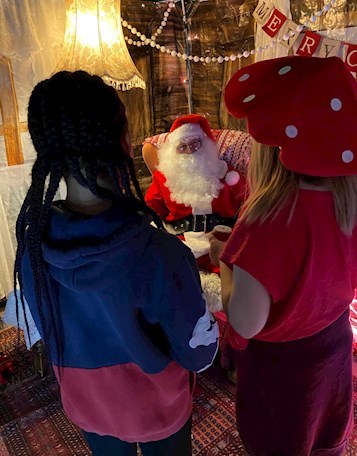 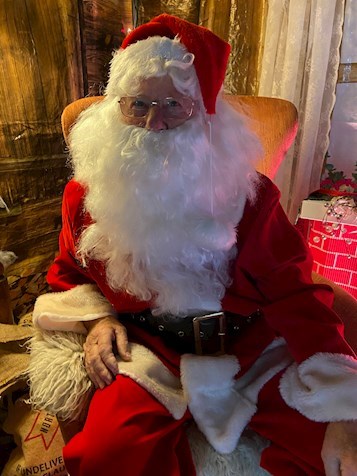 George Smith and his 79-year-old wife Doreen pulled on their festive boots this Christmas and transformed into Santa Claus and his trusty elf, to welcome the community to ExtraCare’s Stoke Gifford Retirement Village.

George and Doreen, who have been residents at Stoke Gifford Retirement Village since 2019, took their place in the Christmas Fayre festivities after a request was put out for volunteers. For George, this was his second stint as Santa after previously taking up the role before the pandemic back in 2019.

George had to twist Doreen’s arm as the latter wasn’t sure about taking on the position of an elf, but the Christmas spirit took over and the couple spent Saturday collecting money and welcoming guests to Santa’s grotto. “It was such a lovely atmosphere, people truly entered into the spirit of the day,” George comments.

“It was a great thing to get involved in,” Doreen agrees; “We join in as many activities as we can here at the village, everybody is so friendly and you do get out what you put in, so it’s important to involve yourself.”

The couple, originally from London, who have been married for over 60 years, moved to the ExtraCare retirement community after deciding they may face issues growing older in their Bristol home. The pair wanted somewhere with social facilities and as the village in Stoke was being built when they made their decision, they chose their new home after visiting the show apartment. George admits; “We did a lot of soul-searching at the time, but we have absolutely no doubt now that we’ve done the right thing.”

With their family around the corner, a son living ten minutes away and a daughter ten miles away, the couple enjoy village life and were excited to give back to their community in its celebrations.

Stoke Gifford Retirement Village is home to over 260 apartments for over 55s in South Gloucestershire and Bristol. The village opened its door to visitors for the Christmas Fayre and George had visits from over 61 local children to the grotto, with each one receiving a gift. George adds; “I volunteered because I love being a dad and a grandad, children love Christmas and to see the joy they have especially at this time of year is brilliant!”

Lifestyle Manager, Steve Fielding was proud of the event stating, “our Christmas Fayre is always a highlight in our calendar of events. After missing a year, it was great to have so many people in the Village again creating such a fantastic festive atmosphere. Residents, such as George and Doreen and all our other amazing resident volunteers, really contributed to a brilliant day and we’re so proud of all the work that staff and residents put in to make our Christmas Fayre a big success.”