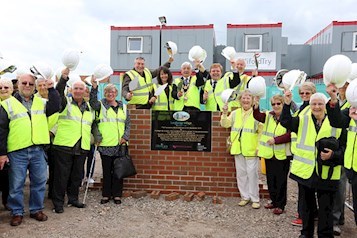 The fifth affordable retirement village to be built by The ExtraCare Charitable Trust as part of a £200 million partnership with Birmingham City Council reached a key stage this week.

The 260-home retirement village will be home to around 350 people in spacious one and two-bedroom apartments. The homes will be affordable to people on a range of incomes with 132 apartments available for shared ownership, 76 for outright sale and 52 for affordable rent.

Up to 30 jobs will be created when the Village opens, with a further 200 jobs on site during the construction phase.

Approximately a third of residents within the Village will receive help with care. Dependent on individual circumstances, the Village can support residents with significant assessed care needs, including dementia.

The Village will offer a range of communal facilities including a bar and bistro, village hall, IT suite, hair and beauty salon, gym and shop. Facilities can be accessed by residents, their families and Longbridge residents. Over 50 activities will be on offer each week, including IT classes, choir singing, gardening and wheelchair aerobics.

Birmingham City Council’s cabinet member for Neighbourhood Management and Homes, Cllr John Cotton, said: “Our partnership with ExtraCare means that more than 1,500 local older people will benefit from affordable housing and the state-of-the-art facilities will help them to enjoy independence, increased activity and a high quality of life.

“This fifth Village at Longbridge builds on the success of the Villages that are now up and running in Erdington, Newtown and Edgbaston with a fourth Village due to open in November at Bournville. I look forward to the fifth Village opening in Longbridge in 2017, providing quality housing for older residents right across the city.”

Christine Addison, Executive Director for the Midlands for the Homes and Communities Agency (HCA), said: “We’re pleased to have provided both land and funding for help make the Longbridge Retirement Village a reality. The retirement village is part of the overall regeneration work underway at the Longbridge site and is also a great example of the HCA’s work to support older people. Developments such as this play an important role in making sure that people can remain as independent as they want to for as long as possible.”

Work began on site in February and the Village is due to welcome its first residents in 2017. Show apartments at the Village will open next year.

Longbridge Village is the final stage in a £200 million development programme to build five retirement villages in Birmingham that will house a total of over 1,500 local older people. The project is the result of a partnership with Birmingham City Council. Three Villages are already open across the city and the fourth, Bournville Gardens, is due to open in November.

For many residents, new homes have meant new friends and a new lease of life. The charity gives older people the chance to enjoy a healthier, active and independent lifestyle in communities that are a modern alternative to the traditional care home.

A ground-breaking, three-year study with Aston University recently found that care costs are slashed by more than a third and health benefits soar as a result of ExtraCare’s successful combination of health, social care and housing services for older people. Find out more at www.extracare.org.uk/research

Applications for homes at the Longbridge Retirement Village will open next year, but those interested in living in the Village can register their interest now by phoning 0870 777 4800.

About The ExtraCare Charitable Trust: The ExtraCare Charitable Trust enables older people to enjoy a healthier, active and more independent lifestyle in a network of inspirational communities. Founded in 1988, ExtraCare is a registered charity based in Coventry. It operates 3,831 homes within 14 retirement villages and 17 smaller housing developments across the Midlands and the North. Each Housing Scheme or Village has a host of social, health and leisure facilities that are accessible to over 4,400 residents and up to 5,000 older people living in surrounding communities.

ExtraCare's five-year strategy includes a £200 million development programme to complete at least five Villages in Birmingham with the City Council, as follows: