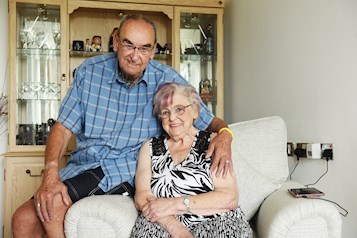 Newly-weds David and June Hope moved into Wixams Retirement Village on July 5th. David tells us why moving into the village was the right decision for them.

‘Before we came here I was living on the other side of Bedford in a little village called Clapham. Prior to that I lived in Milton Keynes, with my previous wife of 45 years. We had moved around several times during our married years due to my previous employment.

We had four children between us. Unfortunately, our second son only lived for 28 days, then 23 years ago we lost our eldest daughter, so I now have a daughter and a son left.

When my previous wife died in 2008, I started to get quite lonely. After 8 years I joined a dating agency and initially did not have any success with it. Then last November, I found that eight women had contacted me. Among the eight there was only one person I particularly liked, and that was my present wife June.

We first met on November 25 2018, and it’s been a whirlwind romance since then because we got married on April 20 earlier this year, and very happily so.

During my previous married life my wife and I were both very strong on the opinion that when we got older, if we became unwell then we did not want to impose on our children. We felt strongly about this, and when I met June she was also of a similar opinion.

On my return from a holiday last year, I found a pamphlet through the door on Wixams Retirement Village. I very much liked the look of the village, and I read it and thought this has got to be the answer to what my previous wife and I originally sought.

We came to the village and after being shown around I fell in love with the place immediately! June also loved what was here and available to us.

We have now been here since July. We’re thrilled to bits with our apartment, it is beautifully built! Being an ex-quantity surveyor I am very critical of building, but the quality of the workmanship and the amenities we have got at the village is absolutely first class.

Not long after we moved in I offered to set up a bingo club, as us oldies love a game of bingo! We’ve just had our first evening and were impressed to have 39 people turn up, it was good fun on the night as well. We also both join in with the quiz nights, and I enjoy playing a game of snooker which in itself I think is an excellent facility that we have here.

The staff are absolutely fantastic. They’re a delight to associate with and since we’ve been here they could not have been more helpful. I’ve got nothing but compliments for them, and they do it with a smile as well which is so important!

In 1987, I had a tracheostomy performed because I was not getting enough oxygen to the heart, and then two years ago, I was having more breathing difficulties. After having tests in hospital it was found that I have fibrosis of the lungs. Unfortunately, there is no cure for it, so gradually I will lose my breath over time.

With my existing medical conditions, having care and well-being services available to us at the village is absolutely vital. If my wife’s health deteriorates, it’s essential for us to know that there will be care on offer, as this will take a lot of pressure off our children as my fibrosis gets progressively worse.

We’ve met a lot of people, and I’m sure we will make friends as time passes, but the important thing is we won’t be a burden to our respective children because we have everything we need here.’

Wixams Retirement Village provides a new outlook on life for over-55s in Bedford.