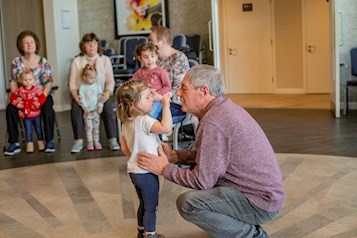 Rob and Pam discuss life at ExtraCare’s Solihull Village, defying the odds and why the visiting intergenerational class has changed Rob’s life for the better.

At Solihull Village twice a week residents are joined by young children from local childminding and intergenerational advocates HomefromHome. Together residents meet with children aged from nine months to four years old to enjoy library time and tennis together. The benefits are manyfold, for Rob Randle,72, the intergenerational classes have truly benefitted his life.

Rob who has short term memory issues and dementia has attended multiple classes. He states; “It’s brilliant, I enjoy it. I call myself grandad, it’s amazing. Coming here and seeing what the children can do and understand from such an early age it’s unbelievable. It makes me happier for coming.”

Rob’s wife Pam, 70, shares what the classes have meant to him and how they came to their new home at the ExtraCare village.

How do you feel the intergenerational class has benefitted Rob?

He loves it, he can’t remember when it is, so I have to remind him, “you’re going down to the children today”. It gives him a good feeling and a purpose as he doesn’t get to do too much anymore. We have to do so much together but Rob goes in there on his own, I think it’s important he has some time away from me, I pop to the shops and he goes to the class, he really enjoys it.

What do you think of the classes?

I watched today, and to see the children all around him was lovely. I know he enjoys it with the children, and that’s so important, it’s a bit of time for himself without me and with others.

What brought you to ExtraCare’s Solihull Village?

When Rob was younger he was a very active man but suddenly at 52 he had two brain bleeds. In 2002 Rob was given hours to live but walked out of hospital five weeks later. Twenty years later he was still defying the odds, but I knew that living in our Sheldon home was going to become too much and we would have to downsize at some point. When Rob was diagnosed with dementia during the pandemic, I felt it was the right time. I thought we had better move now before he got any worse, we didn’t want to be in a three-bed house. Our daughter helped us move and she dealt with so much for us.

How do you find life at Solihull Village?

We’ve settled really well, we moved in last April, the bus routes have been brilliant because we had to give up the car after Rob couldn’t drive it anymore. Rob can come downstairs here, he can go to the library, I trust that he can do that, I’d be worried elsewhere. The people here are lovely, and we feel safe. That’s a big thing to feel safe. We have made lots of friends. I love it here, I’m content.

Image caption: Rob and one of the young class attendees.