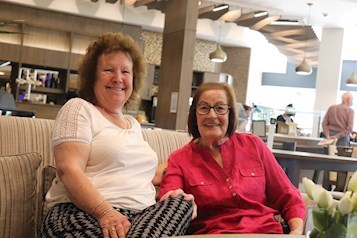 Two best friends at ExtraCare’s Solihull Retirement Village have shared their experiences of village life. Lilian Bradford and Mary Kerley both 82, became best friends after arriving at the village as widowers.

Lilian had been in the same house originally for 56 years, but she and her daughter began to think about the positives of a move to Solihull Village after a loss. Lilian comments; “I found myself on my own in a big house, my husband had passed away and both my daughter and I knew I needed something else.”

Lilian initially visited ExtraCare’s Longbridge Village where a friend lived and was impressed with the site, she opted to move to the village she lived closest to, Solihull Village, in May 2021.

Mary, who like Lilian had found herself widowed, was also living with the condition COPD (chronic obstructive pulmonary disease). Living much of her life in Sheldon, Mary, a former nurse originally from Ireland, arrived at Solihull Village at the end of April. Mary and Lilian met in their village lift and shared life stories, soon becoming inseparable. “We look out for each other,” Lilian adds.

Mary’s daughter is a mental health nurse who had heard of ExtraCare’s villages at the clinic she worked in. Originally Mary wasn’t sure about the move, as she wanted to remain at her house but after meeting ExtraCare’s sales team and exploring the village herself, she felt instantly at home. “Nicky from the sales team was fantastic,” Mary comments, “she really showed me around well and told me what to expect and the flat was lovely.”

Mary’s experience has been a true family affair with her granddaughter designing and helping furnish her apartment. After moving in both Mary and Lilian’s daughters who each live close by, stayed with them for a few nights to make sure they felt settled in their new homes.  Both women have thrived ever since, they are members of the gym, take part in dancing, senior strength, Pilates, young at heart, upper body conditioning, and a number of the many activities on offer at the village.

Lilian has some advice for anyone considering a move to an ExtraCare village; “Come and have a look, you’ll love it. We aren’t lonely anymore, you have people around you to make you feel safe. The staff are so approachable, I love it, there really is nothing I don’t like about it. I thought I had no life before, but this place has given me a new lease for life.”

The importance of friendship in the village is felt keenly by both women; “It feels like a community,” Mary states, “Lilian calls for me and we go to the gym or a class together. The village is about companionship, it’s having a laugh and a joke together. If I’d been at home I honestly don’t think I would be here anymore. I had no interest in anything. Now we give any and all of the activities a go.”