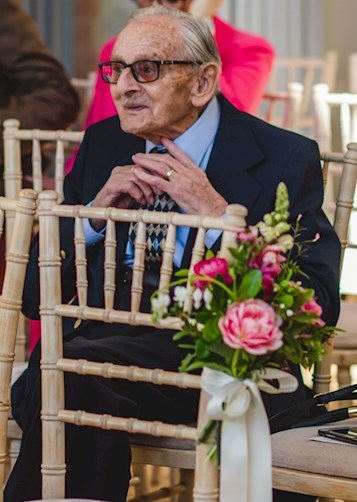 Residents at Shenley Wood Village in Milton Keynes are keeping their spirits up during the national Covid-19 crisis, celebrating the 100th birthday of village resident, Ted Prior, who moved to the community from Bletchley.

Ted’s War Time History and Family Life:  Ted was born in Eastbourne on 29th May 1920 and the family moved to London during the 1920s. As a youngster he witnessed the fire that burnt down the Crystal Palace, built for the great exhibition. Ted survived pleurisy and pneumonia during a three-and-a-half-year ordeal in a World War Two Japanese prison camp and went on to have a successful post-war career with the Castrol Oil Company.  With his first wife, Doris, he had three children, enjoying a busy family life helping to raise his three sons with whom he shared his love of football and badminton.

Retiring to Bletchley - A Committed Community Volunteer: Ted was widowed in 1970 but met his second wife Barbara, eventually retiring to Bletchley in 1982. Together, they served the local community as volunteers at the Milton Keynes Hospital League of Friends for 25 years, supporting the shop and ward rounds with refreshments.  They helped The Friends raise hundreds of thousands of pounds.

Ted and Barbara shared a love of travel, especially in Europe, and both enjoyed bowls, playing with Bletchley Town Bowls Clubs.  They joined competitions and matches with other clubs making many new friends along the way.

Sadly, Barbara died in 2012 and Ted moved into The ExtraCare Charitable Trust’s Shenley Wood Village where he continued to play recreational bowls right up until 2017, when he finally hung up his bowls at the grand age of 97!

Village Activities Coordinator, Michelle Gibson, says: “We are looking forward to marking the occasion.  Our celebrations will be ‘socially distanced’ in line with clear safety protocols, but our hearts will be together, celebrating the life of someone who is so much cherished and admired by this lovely community.”

Ted’s son Martyn, who lives in Dorset, says: “Dad spent his 21st birthday in ‘lockdown’ under canvas as he went off to war in 1941, so he’ll not be daunted by the current circumstances.

“Friends at Shenley Wood Village and from across the community, including the bowls club, will remember Ted sending him their best wishes as he celebrates his milestone 100th birthday.”