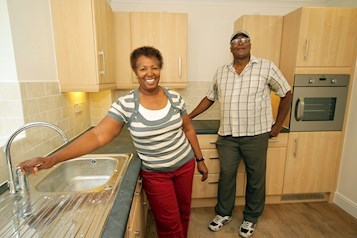 Rosita Codrington is like a ray of sunshine. "I feel like I'm still 21, especially when we have entertainment and I start dancing," she laughs.

She was brought up under the sunny skies of the Caribbean on the islands of Saint Kitts and Saint Thomas.

When she first came to England at 16, it was so cold she went home again in less than a year.

"I remember standing at a bus stop and it was snowing and I couldn't feel my fingers," she recalls.

But Rosita returned a year later and decided to stay. She married, had three children and found a job in a nursing home where she stayed for 14 years.

For a time during the 1980s she went backwards and forwards, staying a few months in the Caribbean and then coming back to the UK, until eventually she settled here again. She found a job she liked as a warden in sheltered housing and married for the second time in the early 1990s.

Rosita and her husband Milton bought a piece of land, high in the hills in St Kitts, overlooking the ocean, about ten minutes' walk from their own private beach. Attracted by the warmth and the fresh food, they dreamt of retiring there, but then they realised it was just a dream. It was too high in the hills to walk up there when they were older. "I said: 'Forget about it, we're not going to go through with it,'" she says. "My family is here, my mum's here, my sisters and brothers and the kids. My husband had to have two knee replacements. It wasn't practical at all."

Instead, in November 2012, Rosita and her husband moved into a two bedroomed rented apartment in Pannel Croft in Newtown, Birmingham. "If something should happen to my husband or myself we have the facilities here, we have the support team that can look after us. You really don't know what's around the corner, anything can happen," she says.

Rosita retired five years ago after spending most of her life working with older people. Now she is keen to help organise activities, including a Caribbean evening, and wants to put her experience to good use at Pannel Croft.

"I don't want to let it go to waste," she says. "We have wonderful staff here and some lovely tenants who want to get involved. I'm like a little Jack Russell running around. I want to feel like I'm doing something and putting something back into the retirement village. I want to see this place progress. It's what you make it. Pannel Croft is going to be one of the best retirement villages in the country."

Rosita is looking forward to the summer. She still doesn't like the cold, but her new apartment has a beautiful view of the roof garden and she has already heard the birds singing from her balcony.

Her husband gave away his fishing equipment when they moved in. He had planned to use it when they went back to live in St Kitts. Now they are planning to make Pannel Croft their home for the rest of their lives.

"I still refer to St Kitts as my home because I was born there but I can't see myself going back, only for holidays," she says. "Since I have moved into Pannel Croft, it's like a permanent holiday."

Picture: Rosita and her husband Milton show off their new home at Pannel Croft Village.