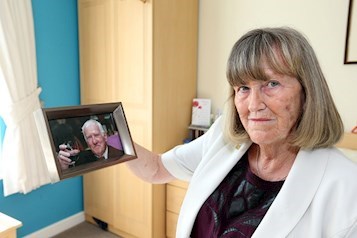 Jean and Pete met at the railway station when she was just 17. He was the young soldier who carried her case, then ate her sandwiches on the train. They were married for 52 years and when he died she said: ‘I felt as if my right arm had been cut off.’

It was the support of her family and her friends at New Oscott Retirement Village that helped to pull her through. Scores of residents at the village know just what it is like to lose someone they love.

Pete Humphreys was steady and reliable, and that’s what Jean loved about him. He was a former Birmingham policeman who enjoyed family holidays, making sandcastles on the beach with his children as they were growing up.

In 2010, a year after their golden wedding, Jean and Pete moved to New Oscott Village. They were getting older and Jean was concerned about what would happen to Pete if she died first, because she was more outgoing.

‘The kids used to laugh because everywhere we went we were always holding hands,’ she says.

Pete ran the choir at New Oscott Village and volunteered on reception and they both made new friends.

Then in November 2011 they went on holiday to Benidorm. During the holiday 75-year-old Pete was diagnosed with terminal cancer, they were taken back in an air ambulance and he died just days later.

At first Jean didn’t want to leave her apartment, she knew that if anyone sympathised with her she would cry.

It was hard when she went back to her volunteer roles in reception and in the bar, but she says: ‘Nobody wants to see someone behind the bar in tears. You shut off when you came out of the front door and left your sadness behind until you went back through the door again.’

A resident who had been widowed told her ‘You have to start making a life for yourself.’ Another persuaded her play dominoes on a Monday night.

When Jean started coming down to watch some of the events she says ‘I felt so guilty for enjoying myself.’ During line dancing she sat at the back for weeks until the residents finally persuaded her to join in.

Now in her seventies, she is busy almost every night. On Monday night it’s dominoes, on Tuesday she has started a ladies darts team, on Thursday she does line dancing and at the weekend she volunteers in the bar.

Jean still misses Pete but she says: ‘How can you walk around crying when there are other people in the same position.’

Many of her friends have been widowed. ‘We say we don’t know how we would have coped in our own houses,’ she says.

There’s sadness when she hears the Don Williams song ‘You’re My Best Friend’ and it reminds her of concerts she went to with Pete. But first one resident puts their arm around her, and then another. They know.

‘I can’t tell you the support the residents give to each other,’ she says. ‘I have some very close friends here.’