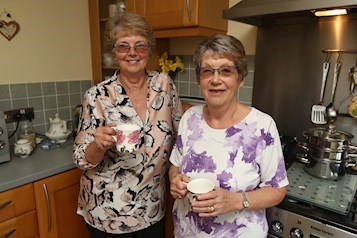 Lynne and Val were born just two days apart. They went to school together. They started work in the same office. And when Lynne married Val’s brother at 16 it was Val who was her bridesmaid.

Now, more than 60 years after they first met, Val and Lynne have both moved to the new Longbridge Retirement Village in Birmingham, where they plan to spend the rest of their lives just a stone’s throw away from each other.

‘We are going to have great fun,’ said grandmother Val. ‘We love entertainment and activities.’

The couples look back on a lifetime of memories together. They have been on holidays to San Francisco, Dubai, and the South of France. They have shared weddings, christenings, Val’s 50th birthday party, Mick’s 60th, Lynne and Graham’s golden wedding when they all went to Las Vegas. Val and Lynne talk every day.

‘We like the same things and the four of us get on,’ said Lynne. ‘We have a laugh. We are closer now than we have ever been.’

Val and Mick, a former shop steward at the Longbridge Car Factory, have lived in their three bedroomed semi-detached house for 40 years.

Val says: ‘I want to enjoy what life I have left. Both my children think it’s a good idea.’

Lynne and Graham were finding the large garden in their bungalow more difficult to manage. Graham, a former Longbridge car factory worker and window cleaner in his seventies, has Parkinson’s.

‘We spent all our time doing the garden and it became a chore and not a pleasure,’ says Lynne. ‘Instead of going out and enjoying ourselves or doing other things we are cutting the grass, we are cutting the hedge. Things wear out and you have to keep decorating.

‘At Longbridge Village, we are safe, there’s help if we want it, there’s things to do, you only have to go downstairs,’ she says.

‘If anything happens to Graham or to me we can call on Mick and Val, and they can do the same with us. We will make other friends and have a social life. I don’t want to be lonely.

‘Now we have got a new beginning. It’s so exciting.’