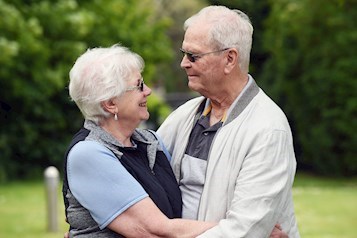 Bill was diagnosed with Lewy Body Dementia last year. Since then he has participated in a number of activities organised by the village’s Enriched Opportunities Programme including the Musical Exchange Project with City of Birmingham Symphony Orchestra.

Bill, 76, who lives in Longbridge Village says: “We all join in, getting to grips with the instruments, with several of the residents using the baton to conduct the musicians and us. Gwen always has the chimes, her lovely face lights up, her smile!

“The CBSO crew are lovely people, very friendly and very talented. They get us to join in. Try things out. Although there were special moments last year, I think this year, the group has really gelled - I certainly look forward to Thursday mornings.”

On moving to Longbridge, Bill says his life has changed and his talents surfaced: “I have become known as ‘The Poet’, I have performed solo at two events and am playing in the Bistro with others in July.  I have written a Book of Poems, which is a paperback on Amazon and have a second book in the pipeline, as well as a children’s book. One of my poems ‘Be Yourself’ has been adopted by a class at Haslucks Green School. I guess the talent was lying dormant. ExtraCare, in particular Claire and the EOP, have given me the confidence to do it all.”

Bill lives with his wife Ann, aged 73, she says: “Initially I believe Bill thought he should make the move to Longbridge for my sake so that whatever difficulties occurred due to his then mild cognitive impairment, it would be easier for me as his carer. I knew it could help us both but never dreamed that it could make such a significant difference to Bill. It has given us both a new lease of life, full and meaningful.

After their move Ann soon became a volunteer helping deliver the EOP and Musical Exchange Project: “What an impact this has made on many of the residents! It can be seen in their faces, their reticence to sing and participate initially which is soon replaced with eagerness and enthusiasm. I have watched them blossom and had a chance to talk to some residents that I may not have encountered.

Ann continues: “How wonderful to hear one resident say she often awakes and will then start humming the tune used to introduce our sessions with the CBSO.  It sounds so wonderful and is so uplifting. It brings back childhood memories, encourages participation and co-operation and much fun and laughter is enjoyed by all.”