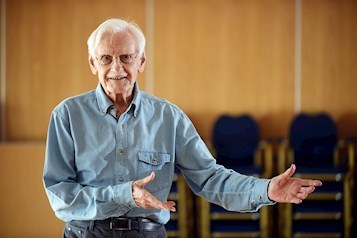 Dunkirk veteran Victor Chanter has brought a lifetime of memories with him to Lark Hill Village. The 97-year-old great grandfather recalls his childhood playing cricket on the cobbled streets of Yorkshire, and games of football with caps and coats put down as goalposts.

He can remember the horse and cart that delivered the coal and the lamplighters with their long poles lighting the street lamps.

These days Victor enjoys keeping up to date with technology. ‘I’m texting now and I think that’s a good idea,’ he says.

He thinks it is good for young and old to mix.

Victor’s mother taught him how to sew, darn, scrub floors, wash and iron, dig a garden and clean windows.

He won a scholarship to a grammar school but left aged 15 when she died.

Victor then became a footman to a retired Scottish army major before joining the navy.

During the war he met Marjorie at a dance; she was in the Women’s Royal Naval Service.

They married after VE Day and had four daughters. After the war Victor became a school photographer, a dental mechanic and an insurance representative.

The couple moved to Lark Hill Village in 2010.

‘I thought it was great,’ he said. He started a singing quartet with other residents.

Victor has always liked music. During the war he was a member of a close harmony group performing in hospitals and camps.

He enjoys musical events at the village and likes the tea dances on a Thursday afternoon.

The couple had been married for 66 years when Marjorie died in 2011.

The book they wrote about their life, It was all worthwhile, is dedicated to her memory and to his family. It includes Victor’s wartime memories. He was awarded the Légion d’honneur.

Victor believes the best thing about Lark Hill Village is the friendships: ‘The camaraderie you can get if you join in, but I don’t join in enough,’ he says.

He enjoyed taking part in Old People’s Home for 4 Year Olds and says it was interesting to see a new generation. ‘It was great,’ he says.