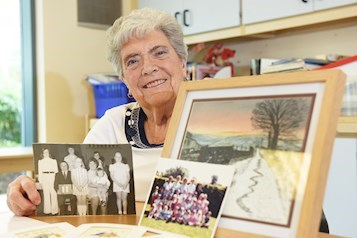 Margaret Reynolds, a former nursery teacher, says moving to Lark Hill Village was the best move she ever made.

But that didn’t stop her dancing with her walker when she took part in Old People’s Home for 4 Year Olds.

Margaret was five years old when she decided she was going to be a teacher. That Christmas her present was a desk and chair.

She taught in an Infant school and when she retired she was nursery teacher in charge at a nursery, where she had been for 16 years.

Margaret and her second husband Gordon had six children between them. She had three daughters, he had two sons, and they had a son together.

The couple moved to an apartment at Lark Hill Village in 2009.

Margaret was finding it difficult to get into the bath at the three bedroomed house where they lived at the time.

Gordon had problems with his heart. They wanted to be somewhere where they could have care if they needed it.

‘We loved it right from the word go,’ says Margaret. ‘I got far more of a social life than I had ever had before.’

They had two years together at the village before Gordon died in 2011.

Margaret enjoys the friendships, the facilities and the entertainment at Lark Hill Village.

‘I do enjoy living here,’ she says.

She goes to the film night and the quiz night, she has enjoyed a painting and a sewing class, and she enjoys the events.

‘I have lots of friends,’ she says.

Margaret enjoyed taking part in Old People’s Home for 4 Year Olds. ‘I loved every minute. I really did,’ she says.